Life goes on for Ukrainian soldier survivor of Debaltseve battle 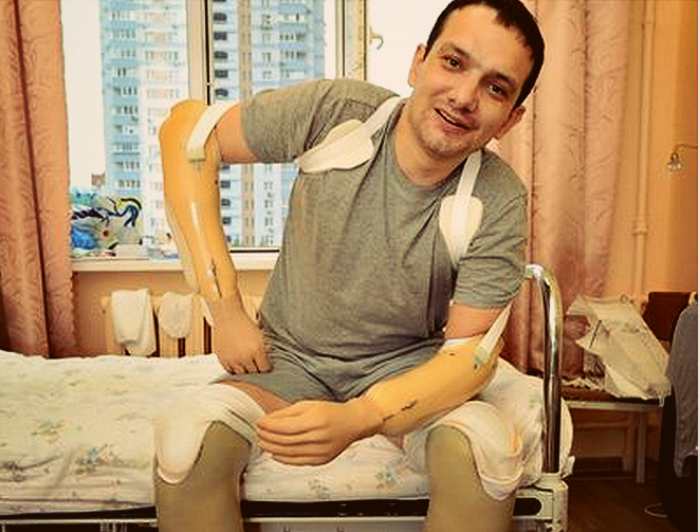 Vadim was a medical instructor before he lost his hands and legs in battle in Debaltseve. His story is an inspiring example of the power of the will to live. Vadim and his wife are expecting a second child, and he is preparing to be able to bring his wife home from the hospital maternity ward.  He is also doing all that he can to be able to hold his new baby.

The medic will never forget the longest three days of his life, without food, water or medical help, in freezing cold temperatures. Vadim was injured in a mine explosion as he was transporting wounded soldiers from the battlefield of the Debaltseve pocket to a hospital. Everyone but Vadim actually froze to death. He managed to survive by eating snow and foraging for food. He forced himself to stop thinking about death and keep moving.  He was eventually found and captured by DNR [self-proclaimed “Donetsk People’s Republic”–Ed.] terrorists. He was returned to Ukraine in a prisoner exchange, where he learned all his limbs would have to be amputated. However, this wasn’t a death sentence for Vadim.

I waited for prosthetic limbs like it was the best gift in my life.Today the 42-year old Kyivan resident enthusiastically undergoes daily rehabilitation and trains to use his prosthetics. Vadim isn’t yet able to live independently, but he is actively trying to, because he doesn’t want to be a burden to anyone.

“I waited for prosthetic limbs like it was the best gift in my life,” Vadim exclaims. “Losing my limbs was very hard psychologically. The first thing any person losing a limb wants is to be shot. You don’t want your family to see you in this state. Unfortunately, our country lacks qualified military psychiatrists who could help us cope with this stress. Did I despair?.. Naturally. But I knew I would walk again. I just felt that I didn’t have the right to be down, because I would soon be a father for a second time. That means I have a wife and children to support.”

It took several days before Vadim regained consciousness after the amputation. Mostly he just stayed silent, unwilling to see anyone. His wife and friends kept him from sliding into despair. They managed to find the words that the soldier needed so desperately. They didn’t just console him, but reassured him that life would go on.

“I am deeply grateful to doctor Vyacheslav Nazarenko who performed the operation without the need for additional surgeries.  This is very important. I then got my “new legs” from the state. I received my “hands” from Ukrainians who live in Spain. They sent the prosthetic devices and medical engineers in Kyiv assembled them for me. You can’t imagine how much I want not to be a burden for my wife. This is why I’m ready to master any devices I have to.

I feel like an athlete.Vadim not only walks on his new prosthetics, he also dances: he can circle his knees and even does sidesteps… The only thing left to master is going up and down stairs. But, given his enthusiastic attitude, no one doubts this man will make it. 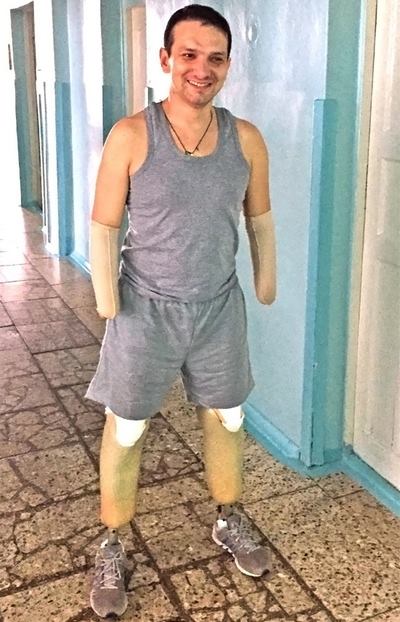 “I feel like an athlete: every day I do my training. Each morning I start with exercises. I need my abs, back and hips to be strong enough to hold my body upright. Even though I used to play sports all my life, after losing my limbs, I could barely manage to do 10 sit-ups. I have my own battle front right here….”

The man jokes that the only thing that disturbs him is that he became taller. Before the tragedy he was 8 centimeters shorter than he is now.

“With the prosthetics, my height is 190 centimeters. That’s somewhat unusual for me. However, prosthetics engineers promise they can rectify this. Then everything will be OK. Naturally, the prosthetics will have to be replaced after a while, because my legs will become thinner from walking. I hope I’ll be able to get more functional prosthetics later. I really want to become an independent person so that I can work and help my family. The thing I value the most now is human life!

Vadim didn’t volunteer to fight, but he didn’t dodge the draft either. He decided he would go to the frontline the moment he was called up.

“I’m from Kyiv. My first education trained me to become a medical worker. To be honest, I worked in the medical field for only a few years. Then I studied economics. I served my draft term as a medical worker in the border guards. For the last ten years I’ve been working in the advertising department of a 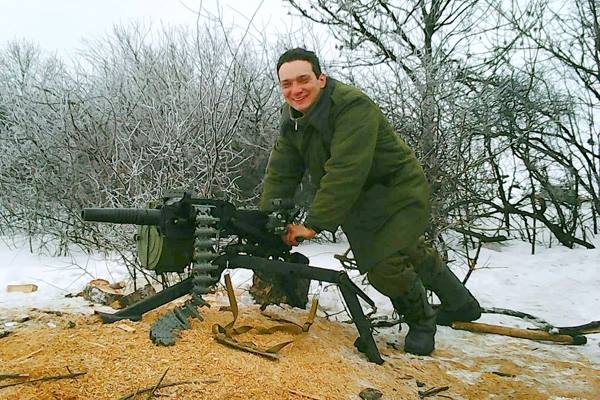 Ukrainian newspaper. On August 4 last year they called me and asked if I was really a medic. When I confirmed that I was, they said: ‘We need you.’ So I went. By late August I had arrived at the frontline. I’ve been to Shchastya, Stanitsa Luhanska, Debaltseve, Chornukhine…”

During his time serving in the ATO [Ukraine’s Anti-Terrorist Operation-Ed.] Vadim has saved the lives of both Ukrainian soldiers and civilians. He remembers treating concussions, mine explosion trauma and other complicated wounds.

When I came to, I realized I couldn’t feel my feet. Everyone froze.

In mid-February Vadim got shrapnel wounds to his right forearm and leg at Debaltseve. Vadim and his fellow brothers-in-arms arrived in Debaltseve where they received medical help in a city hospital. In the evening they left in a convoy for Artemivsk, the lightly wounded in two APCs and the “heavies” in the other two trucks. As they drove during the night, the truck Vadim was in got lost.

“We heard shots and then a mine exploded. That’s when I got the first concussion. Fortunately, my commander quickly threw me out of the vehicle and jumped out himself. Otherwise I would have been burned alive…. It was chaos, I barely heard the commander’s voice through the shooting. He said we probably were in the seps’ territory. It was dark, mines all around us. Our recon survived and drove off. We remained there waiting for help. When we attempted to get out, another mine going off. Everything was mined… I got another concussion, and this time I wounded my back. We couldn’t escape. Vadim recalls a lot of men moaning in pain, the bodies of the dead and wounded scattered all around… and yet he couldn’t help anyone. As he tried to get up, he fell back and then blacked out. He didn’t even have his medical bag.

“I spent the night half-conscious. When I came to in the morning, I realized I couldn’t feel my feet. Everyone froze. My commander as well. I tried to walk but fell. I understood I had little time left. But, interestingly, I didn’t think about death. I realized I had to survive by any means possible.”

Vadim spent about four days in the freezing cold – the weather was especially harsh during those days. He was found by DNR militants. When they realized from his military papers that Vadim was a medic, they agreed to return the soldier to the Ukrainian side. Unfortunately, the long stay in the freezing cold took its toll. The tissue necrosis was irreversible.

Testing positive for love and devotion 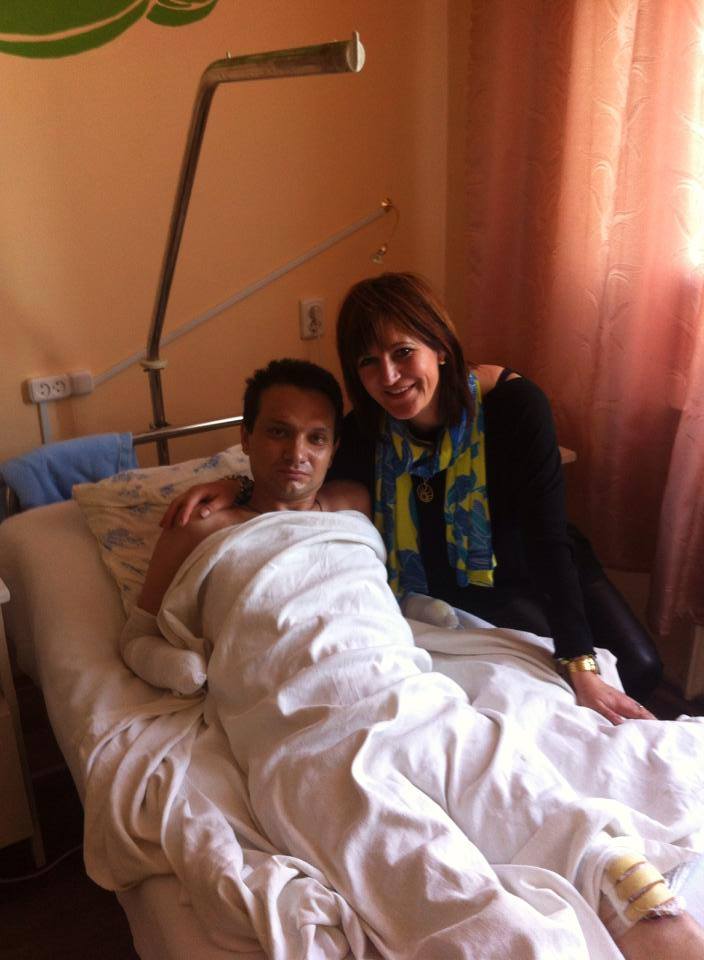 Vadim can’t even recall how many operations he has had to go through. Heavy painkillers, excruciating pain, intensive care and regular wards. He has only recently come off his medicines.  But Vadim believes the main secret treatment that brought him back to life is the love, devotion and fidelity of his friends and fellow brothers-in-arms.

“I keep in touch with the soldiers of the brigade I served in. These are life-long friendships. They are all heroes to me. I keep myself afloat by thinking of my wife and the time when I will become a father for the second time. Life goes on!”

previous articleJust beauty: what Ukrainians looked like a 100 years ago (rare photos)
next articleWeapons, explosives discovered in Putin’s «humanitarian aid»