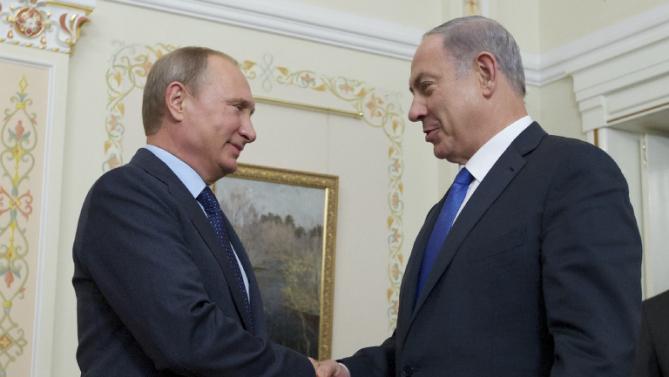 Netanyahu on September 21 was in the Russian capital speaking with President Vladimir Putin hoping to prevent clashes in the Middle East.

According to the official statement from Netanyahu's office, the Israeli prime minister has made the following comments:

"The conversation revolved, first of all, on the issue that I raised regarding Syria, which is very important to the security of Israel. The conversation was substantive. A joint mechanism for preventing misunderstandings between our forces was also agreed to."

Netanyahu said he felt it important to travel to Russia and make Putin aware of the position of Israel on the Middle East conflict:

"The second issue that I raised is good news for very many Israelis who are waiting on a pension from Russia. President Putin said that he would seek to advance the issue soon. He knows that depends on a Russian budgetary outlay but he is determined to do this and he is looking to move forward and conclude this. Of course, I expressed my appreciation; this is important. He is do justice for many people who waiting and hoping for this moment, and I hope that we will be able to announce its implementation soon."

"I would say that the importance of preventing misunderstandings is very big. Israel is constantly working to prevent the transfer of advanced and deadly weaponry from Syrian territory to Hezbollah. Israel is not prepared to accept a second terrorist front that Iran is trying build on the Golan Heights. Israel is taking action and when it does so it is important for everyone, including Russia, to know how we are taking action. It is no less important in order to prevent misunderstandings, and it is worthwhile to do so before they occur and not afterward. Therefore, I asked IDF Chief-of-Staff Lt.-Gen. Gadi Eisenkot, GOC Intelligence, and of course my Military Secretary, to join me in order to clarify things, first of all the facts, secondly our military and security policy, and third to really try to establish that same mechanism for preventing misunderstanding".

Putin said Russia's actions in the Middle East were — and will continue to be — responsible, but condemed the shelling of Israeli territory by hard-line Islamist militants in neighbouring countries, including in Syria.