Nubian Nirvana on the Nile 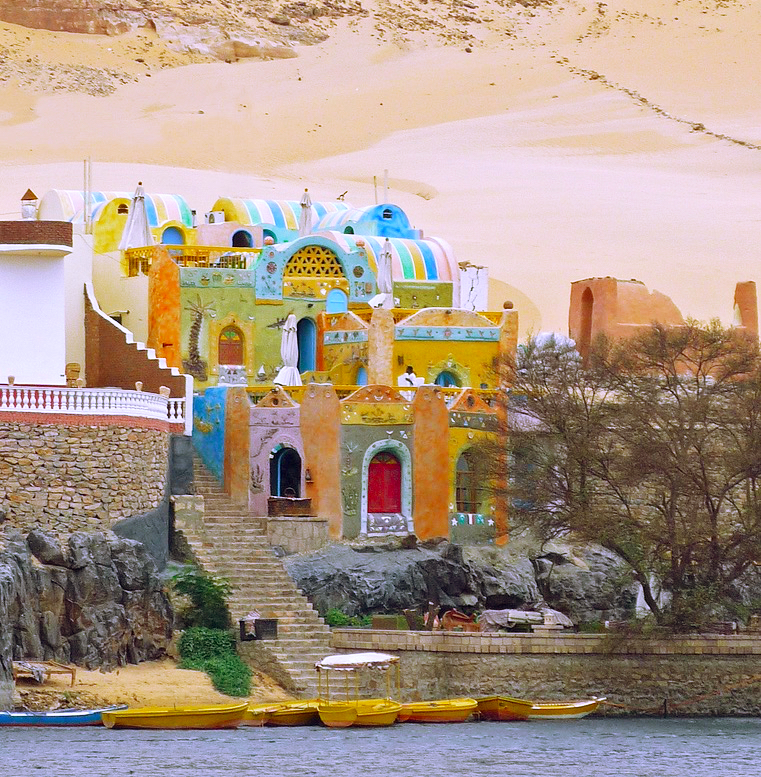 This article probably couldn’t come at a worse time. I don’t think you’ll find many travel sites talking about Egypt right now in light of recent events, but removed from the terror alerts, backed-up flight cancellations and the potential collapse of an overcrowded tourist resort, there is a little-known place along the banks of the legendary river Nile that I think you might find is still worth talking about, maybe even adding to the bucket list. With the Sahara desert at your back and breathtaking views over the Nile to your front, where the great river meanders between the ancient cities of Luxor and Aswan, vivid pastels rise from the sandy shores that used to mark the very boundaries of civilisation. Setting your eyes upon the Anakato Nubian Houses, is a little bit like what you might expect seeing a mirage would be like. A maze of terraced traditional mud-brick style homes brightly painted with geometric shapes and hieroglyphic patterns contrast with the desert sand and the deep hues of the river like a magical hallucination. The small guest house with only 19 rooms was built in the style of the tranquil Nubian villages along a majestic stretch of the Nile River where the population speaks a different language from the Arabs, and the Islamic religion is known to be not as “strict” as in other regions. The women don’t cover their faces and readily speak to foreigners. When visiting these areas it is not unusual to be invited inside the houses to drink a cup of tea. Hospitality is the main characteristic of Sudanese people and if you ever have the chance to experience it, you will never forget it. The Anakato Hotel is the type of place where you get to know the first name of every member of staff. Any reviews you find on it, guests will be remembering their favourite hosts from their stay, whether it was Shaymaa the bubbly manageress, Zizzo the resident musician and activities guide or Kimo and Shaban, the house cooks. Mealtimes are more like traditional feasts, prepared freshly every day for whatever time guests request them and can be served anywhere amongst the maze of colourfully carpeted terraces, nooks and courtyards. Designed as an ecolodge, the rooms are decorated very simply, “pure and primitive”, each with a balcony view of the Nile, and wonderful incense lingers in the uniquely decorated hallways. At night, the hotel is romantically lit by traditional clay lamps and there is little to do other than relax under the moonlight by the river. During the day, Zizzo will take guests sandboarding in the Sahara, swimming in the Nile and sailing on a fellucca. He’ll also take you around his own village of Gharb Soheil to show how Nubians really live and give an insight about their history, culture and lifestyle. On a map provided by the British foreign travel office, outlining the areas advised against all but essential travel, the areas along the Nile are not included, giving the green light to this peaceful haven in Egypt. Anakato hosts pick guests us up at the Aswan international airport, and it’s a short drive from pavement to a small dirt road leading through the Nubian village and market. Rooms are around €130 a night. So I’ll just leave this here. I understand some travellers just don’t want to take the risk, while some feel that risk is all around us and always worth taking. Either way, keep this little pastel mirage at the back of your mind; a peaceful hidden gem of the Nile, a place that inspired an Agatha Christie novel and might just be your own Egyptian muse one day.