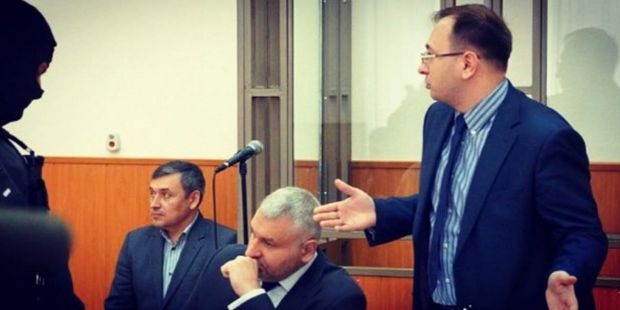 The defense team of Nadia Savchenko, a high profile Ukrainian fighter pilot and MP who is being tried in a Russian court, release details of the courtroom interrogation of the “LPR” terrorist organization’s leader Igor Plotnitsky despite the court ruling not to disclose his testimony to third persons.

Igor Plotnitsky tried to be politically correct while giving testimony in court, according to Mark Feygin, Nadia Savchenko’s lawyer who managed to flash-tweet the developments in the courtroom. In one of his tweets, Feigin said: “We were prohibited from disclosing Plotnitsky’s testimony! Disclosing [them] verbatim!”

According to another lawyer, Nicholai Polozov, Plotnitskiy called “political” the trial against Nadia Savchenko.

Earlier the court ruled to interrogate Plotnitsky in closed hearing, so the public “left the courtroom,” according to Feygin.
Read more on UNIAN:http://www.unian.info/politics/1187588-savchenko-case-sneak-peek-into-lpr-terrorist-leaders-not-to-be-disclosed-testimony.html


News photos world
previous articleHere Are The 31 Best Incidents Of Irony Ever Photographed. #9 Must Be Some Kind Of Cruel Joke
next articleSuspected architect of Paris attacks is dead: two senior intel officials