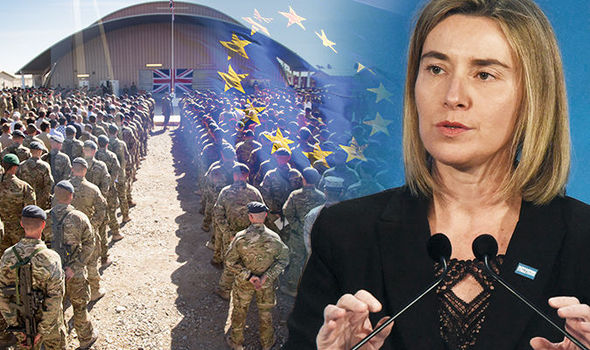 Despite owing its allegiance to the Crown, the British Army was even ordered to emblazoned Headquarter vehicles with EU flags asserting beyond any doubt that they were not involved in a Nato exercise.

The revelation caused former defence secretary Liam Fox to last night warn:  “They will try to say this has nothing to do with an EU Army but the truth is that, bit by bit, they are creating  the mechanisms that will make it possible.”

A British Army Brigadier was today on standby to lead the fighting and peacekeeping force, including and hundreds of British troops,  if it deploys on operations.

That order, however, would not come from Permanent Joint Headquarters in Northwood, but rather from Federica Mogherini, who heads the EU's Foreign Affairs and Security Policy. 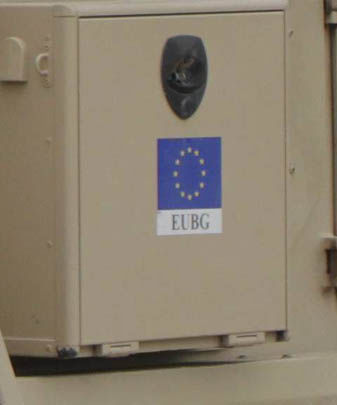 The Italian socialist politician currently heads the EU’s disastrous policy for the 'migrant operation' in the Mediterranean. She will also script and oversee any operational directives for the European Battle Group — putting British troops firmly under the command and control of Brussels.

In addition, all aspects of command will be drawn up and agreed by the security commission in Brussels, with delegates from all 27 countries having the opportunity to decide on such critical tactical decisions as the Rules of Engagement.

The idea for Euro Battle Groups came after the UK and France, which boast the EU’s most effective armed forces, urged Brussels to find a way of taking some of the strain with defence. So far, it has only been used once, in the Congo, and with limited effect.

But it was immediately seized upon as a pathway to creating a single European fighting force and fall under the EU’s Common Defence and Security Policy. 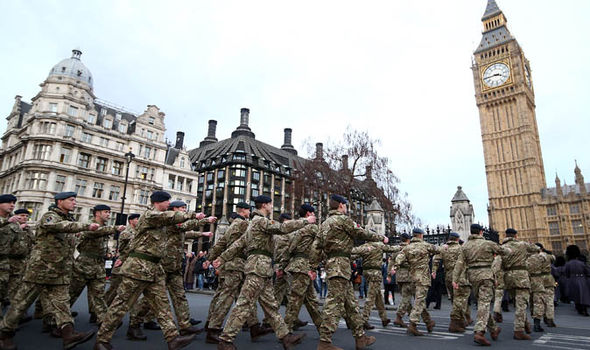 According to a 2013 report by the EU’s own Institute of Strategic Studies, Battle Groups are now “closely associated with the blueprint for permanent structured cooperation  as set out by the then constitutional treaty to allow member states to make more binding commitments to each other in defence matters”.

More than 1,500 troops from Finland, Latvia, Lithuania and Sweden arrived in Britain last week to take part in the war games.

They worked alongside soldiers from the 2nd Battalion, the Yorkshire Regiment,

Last night highly-placed army sources confirmed that, despite the importance of the exercise, both Defence Secretary Michael Fallon and senior brass have been told not to attend to endure the war games maintained a low profile.

Others vented their private fury that British troops were being used as “pawns” in a political game of chess that further threatened the role of Nato as global peace keeper.

While Britain plays a major role in the Rapid Reaction Corps, they warned that signing up to a European Army could further increase tensions with Russia.

In 2009 the European Parliament voted to create Synchronised Armed Forces Europe (Safe) as the first step towards a single force under the control of a EU directorate.

Earlier this month it emerged that Germany had drawn up plans pushing for the rapid formalising of a pan-European fighting force, a defence council and joint civilian –military headquarters to be based in Germany. The White Paper was due to be made public after Britain’s June 23 Euro referendum.

Angela Merkel was said to have pressured Mr Cameron to drop his objections to a formal EU Army in return for supporting EU referendum negotiations.

While the Euro force exercises every year, this year it is being led by the British Army which makes the UK responsible for organising a series of joint exercises covering all aspects of medical, logistics, engineering and war fighting scenarios.

It is the first time the Battle Group has been trained on British soil.

Last night one senior Army officer, based at Army Headquarters in Andover, Hampshire, said: “Ultimately, we would have little or no control of this force were it to be deployed. Brussels will set the rules of engagement and decide what we do and how we do it, having allowed all members of the EU to voice their opinions and make decisions. 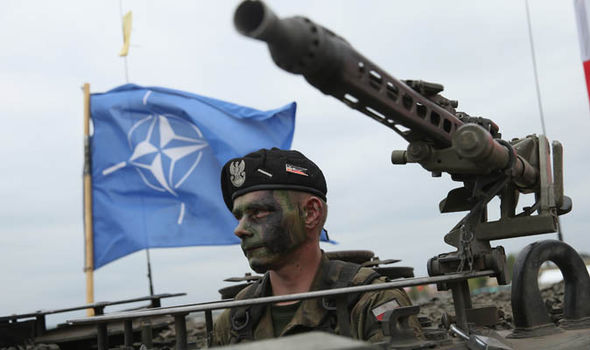 “Frankly, it is an uncomfortable situation."

The Ministry of Defence claimed the Euro war games had nothing to do with a standing EU force.

This was rejected by military experts,

"However much this is dressed up as 'business as usual' for Britain's armed forces, it clearly isn't,” said UK National Defence Association ceo Andy Smith.

“We are seeing armoured vehicles on Salisbury Plain emblazoned with the EU flag, and, worse still, we know that the orders for this exercise are being given not by anyone in the UK, either military or political, but by the European 'High Representative for Security', an Italian. It is very clearly the next stage in the creation of an EU army, which we know Angela Merkel has forced David Cameron to accept, but about which there is still an official silence.”

This was supported by former defence secretary Liam Fox MP, who added: “It is absolutely not true that this has nothing to do with the idea of a Euro Army. There are elements in the EU who have always longed for defence to be under the control of Brussels and not Nato. We can see here how, bit by bit, they are creating the mechanics that will make this possible.

“If the EU wants to have activities and spending that actually supplement Nato, then that is one thing. But they are not investing in their defence budgets, and they are spending what they have on duplicate military structures. All this does is to suck precious funding away from Nato, the one defence organisation that actually works.”

UKIP Defence Spokesman Mike Hookem MEP said: "To paraphrase former Commission President Romano Prodi, if you don't want to call it a European Army, Mr Cameron, you can call it 'Margaret. You can find any name, but what this is an EU Army.

"The Prime Minister and his Pro EU cronies need to be honest about what we will be getting into if we foolishly vote to remain."

A Government spokesperson said: “The Prime Minister has repeatedly made clear that the UK will never be a part of an EU army. We retain a veto on all defence matters in the EU and we will oppose any measures which would undermine member states’ military forces.”