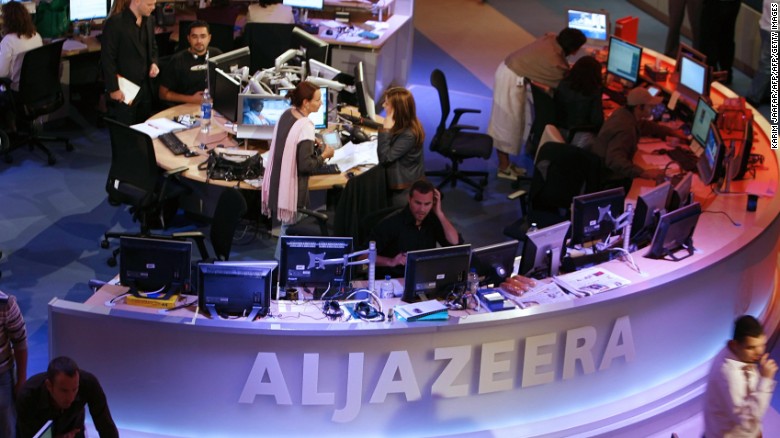 The six, along with former President Mohammed Morsy and his aides, were accused of leaking state secrets to Qatar.
The court ruled Saturday in support of a verdict ratified by Egypt's religious leaders in the case dubbed the "Qatar spying case."

Morsy, Egypt's first democratically-elected ruler, was ousted in 2013. He was found guilty of membership of the now-banned Muslim Brotherhood, but acquitted of espionage, alongside his aides.
He was sentenced to 25 years in prison. Morsy and his secretary, Amin el-Sirafy, also received additional 15-year sentences for other, lesser, charges.

All of the sentences can be appealed.

Morsy was elected President in June 2012 in the country's first free elections after dictator Hosni Mubarak was overthrown.
However, a popular uprising against Morsy's rule broke out in June 2013, and he was deposed in a coup.
Egyptian court sentences Muslim Brotherhood leader to death

Al Jazeera issued a statement rejecting the verdict.
"Al Jazeera believes this is an unjust and politicized sentence that is a part of the ruthless campaign against freedom of speech and expression, in order to muzzle the voice of free press," it said.

"Al Jazeera finds the sentence incriminating to the profession of journalism which all international laws and legislation seek to protect, and to all journalists who should be enabled to report with objectivity, professionalism, and integrity."


Mostefa Souag, acting director general of Al Jazeera Media Network, noted that the country is "classified as one of the most dangerous places for journalists to work in."
Egypt ranks 159th out of 180 countries in the 2016 Press Freedom Index.

He slammed the "illogical" convictions and asserted that they were "legally baseless."

Human rights advocacy group Amnesty International called the charges "ludicrous" and called for them to be dropped.


"Egypt's broken and utterly corrupted justice system is now little more than a handy tool for the authorities' repression of any vestiges of opposition or criticism," it said.

Mohamed Fahmy and Baher Mohamed were freed on bail pending a retrial on charges that they supported the banned Muslim Brotherhood, while their colleague Peter Greste was deported to his native Australia.