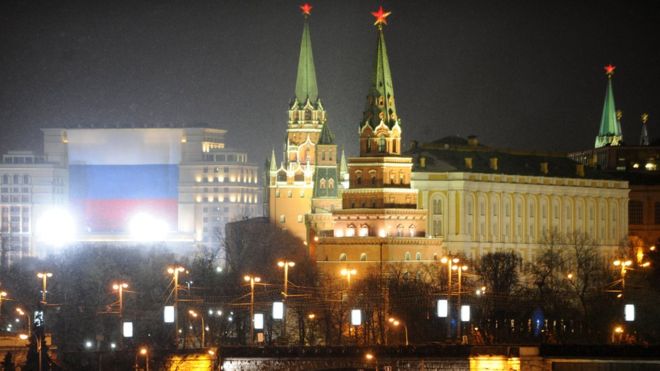 Russia has expelled two US diplomats from Moscow, after the White House said it had ordered two Russian embassy staff to leave Washington.

On Friday, the US State Department said their move came after a Russian policeman attacked a US diplomat near the US embassy in Moscow.

That US diplomat has now been expelled from Moscow, along with one other embassy worker.

The Kremlin accused the men of being CIA agents.
Russia's deputy Foreign Minister Sergei Ryabkov said both US embassy staff were expelled for "activities incompatible with their diplomatic status".

What the US says

State department spokesman John Kirby said the two Russian officials, who have not been named, were told to leave on 17 June.

Mr Kirby said that earlier that month, a Russian policeman attacked a US diplomat near the US embassy in Moscow.

"The action was unprovoked and it endangered the safety of our employee," he said. "The Russian claim that the policeman was protecting the embassy from an unidentified individual is simply untrue."

Russia said earlier this week that the US official was a CIA agent who had refused to provide his identification papers and hit the policeman in the face.

Last month, US officials said harassment against US diplomats by Russian security and intelligence services was on the rise.
The Washington Post said last month that included breaking into the homes of embassy staff, rearranging furniture and even killing a family pet.

Russia has denied the allegation that security staff mistreated the US diplomat. It said the diplomat worked for the CIA and had refused to show ID papers.

"Instead of the CIA employee, who was in disguise, as we understand, it could have been anyone — a terrorist, an extremist, a suicide bomber," Russian foreign ministry spokeswoman Maria Zakharova said.

Russian media have also released a video of what they say was the scuffle between the US diplomat and the Russian policeman.
In response to seeing its two diplomats ordered to leave Washington, the Kremlin announced its move on Saturday.

"After their unfriendly step two employees of the United States embassy had to leave Moscow," Mr Ryabkov said.

"They were declared persona non grata for activities incompatible with their diplomatic status."

No official response has been made by Russia to the allegations of harassment of US diplomats. A statement to the Washington Post said there had been US provocation against Russian diplomats.