China floods: More than 150 killed and hundreds of thousands evacuated 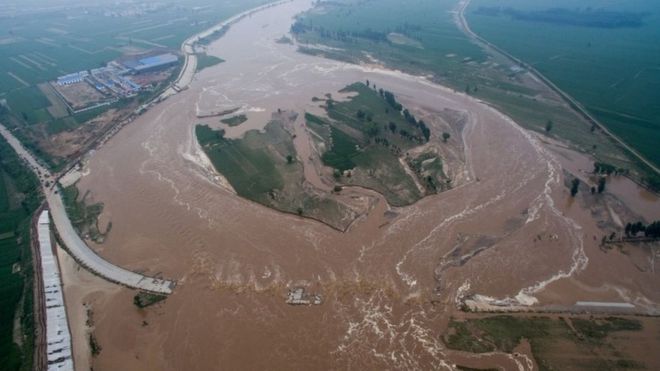 Floods in north and central China have killed at least 150 people, with scores missing and hundreds of thousands forced from homes, officials say.

Hebei and Henan provinces are the worst hit by the flash floods and landslides.

At least 114 people have been killed in Hebei, with 111 missing and 53,000 houses destroyed, officials say.

In one city, Xingtai, at least 25 people died, prompting people to demonstrate against the government for failing to warn them of the flooding.

Thousands of villagers blocked a road on Friday, but police were sent to the scene to halt the protest, according to the South China Morning Post.

The villagers complained about a lack of flood warnings and ineffective rescue efforts.

The casualty figures in Hebei province included 26 people dead and 34 missing in Jingxing county, according to Xinhua news agency.

Henan province has been badly hit too, with 15 reported deaths so far, and 72,000 people evacuated.

The Chinese authorities have said they will provide funds for flood-hit areas, where millions of people are affected.

There have been power cuts and major problems with the communications and transport networks across a wide area, Xinhua said.

The summer rains have been especially heavy in China this year.
It has estimated that more than 1.5 million hectares of crops have been damaged and said direct economic losses exceed $3bn (£2.3bn).