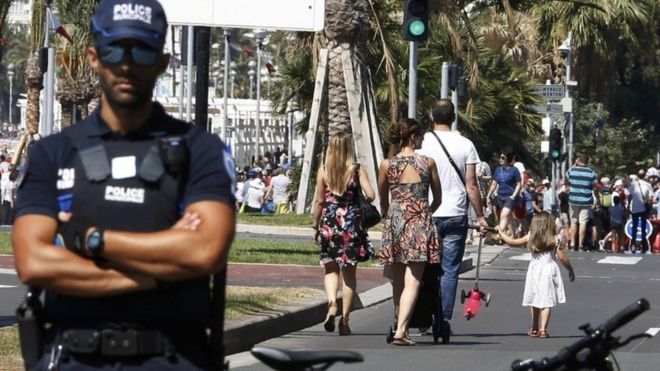 The local authorities in Nice have refused a request by French anti-terror police to destroy CCTV images of last week's lorry attack.

The Paris prosecutor's office said the request had been made to avoid the "uncontrolled dissemination" of images.

But officials in Nice have responded by filing a legal document, arguing the footage could constitute evidence.

It is the latest evidence of a growing dispute between the local and national authorities in the wake of the attack.

More than 80 people died when a Tunisian man, Mohamed Lahouaiej-Bouhlel, ploughed a lorry into crowds out celebrating Bastille Day on 14 July.

The attack, which targeted crowds celebrating Bastille Day, has been claimed by so-called Islamic State (IS).

President Francois Hollande announced on Friday that France would send artillery to Iraq next month for the fight against IS.

France has been conducting air strikes against IS and providing military training but is not committing ground troops.

In the aftermath of the attack in Nice, disagreements have emerged over the scale of police and security force protection around the Promenade des Anglais at the time the attack took place. "This is the first time we are asked to destroy evidence," French newspaper Le Figaro quoted a source as saying. "The CCTV department and the city of Nice could be prosecuted for this, and also the officers in charge do not have jurisdiction to engage in such operations [to delete material]."

The paper said police and prosecutors wanted footage of the attack destroyed to preserve the dignity of victims and so it could not be used by jihadists for propaganda purposes.

But the French government has faced growing criticism about the extent of security measures and some reports have suggested the CCTV footage may show where and how police were deployed.

On Thursday, a French newspaper backed claims by the deputy mayor of Nice, Christian Estrosi, that the government had lied about policing of the event.

Witnesses and a police source who has seen security camera footage told the Liberation newspaper that a single municipal police car was blocking the junction where the lorry entered the promenade.

Mr Estrosi had previously questioned the government's assertion that more heavily armed national police were on duty at the entry point.

Nice-Matin newspaper said lawyers acting for the city authorities had asked the local prosecutor's office to put the CCTV images under sequestration so they could not be destroyed.

On Thursday, five suspects appeared in court charged with terror offences in relation to the lorry attack.

The four men and one woman, aged between 22 and 40, are accused of helping driver Lahouaiej-Bouhlel prepare the attack.