Funerals have taken place in Kabul for victims of Saturday's suicide bomb attack claimed by so-called Islamic State (IS), which killed 80 people.

Bodies were still being collected from morgues as the first burials were conducted in the west of the city.

The bomber targeted a protest march by members of the Hazara minority, Shia Muslims reviled by IS, a Sunni group.

President Ashraf Ghani has led prayers for the dead and Afghanistan is observing a day of national mourning.

Some families were still searching for missing relatives on Sunday, gathering outside hospitals to read the names posted on the walls, and checking morgues.

One family told the BBC they had four people still unaccounted for. 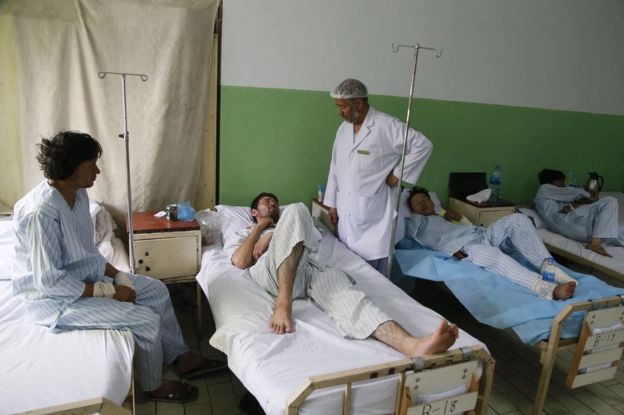 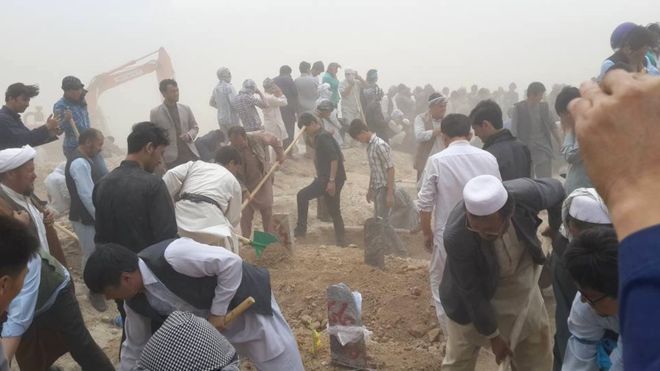 Mourners could be seen brushing down earth over the graves of victims in a report by the Associated Press news agency.

On a hilltop, a digger was used to prepare for further interments.

The government banned all public gatherings and demonstrations for 10 days after Saturday's attack, which also wounded at least 230 people.

Thousands of Hazaras had been protesting in in Deh Mazang Square over a new power line, saying its route bypassed provinces in central Afghanistan where many of them live.

Few details were immediately known about the dead.

One of those killed was an Afghan journalist, Hussiani Mohammadi, according to fellow reporter Bilal Sarwary.

An unnamed victim had been the sole bread winner of his family, his cousin, Sayed Mohammad, told Reuters news agency after finding the man's sandals in a pile of bloodied personal effects. He was killed along with three other relatives, Mr Mohammad said.

An Afghan intelligence source told the BBC that an IS commander named Abo Ali had sent three bombers from Nangarhar province to carry out the attack.

It appears that only one attacker managed to detonate his explosives. The belt of the second failed to explode and the third attacker was killed by security forces, the source said.

Speaking at a hospital, one protester, Sabira Jan, described what had happened: "We were holding a peaceful demonstration when I heard a bang and then everyone was escaping and yelling.

"I saw many people were killed and most of them were covered with blood. There was nobody to help the victims. Policemen were looking at us, and after that I heard gunshots, then I don't know what happened."

President Ghani vowed to take revenge against those responsible for the attack, which was also condemned by the Taliban, Afghanistan's most prominent Islamist militant group, who accused IS of seeking to start a civil war.

The UN mission in Afghanistan described the attack as a "war crime". 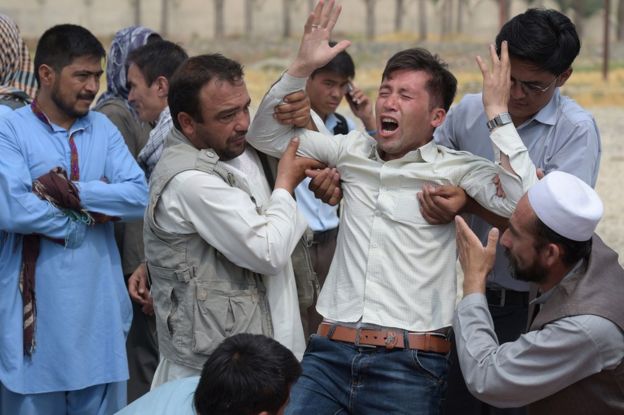 The Hazaras, who live mainly in the centre of the country, have long complained of discrimination. During Taliban rule in the late 1990s, many of them fled to Pakistan, Iran and Tajikistan.

Some Hazaras were furious at both the government and their own political leaders who, they said, had exploited the grievances of their community at longstanding discrimination to shore up their own power bases.

"They sold us and we will never forget this," mourner Ghulam Abbas told Reuters.
"They've built skyscrapers for themselves and their families from our blood." 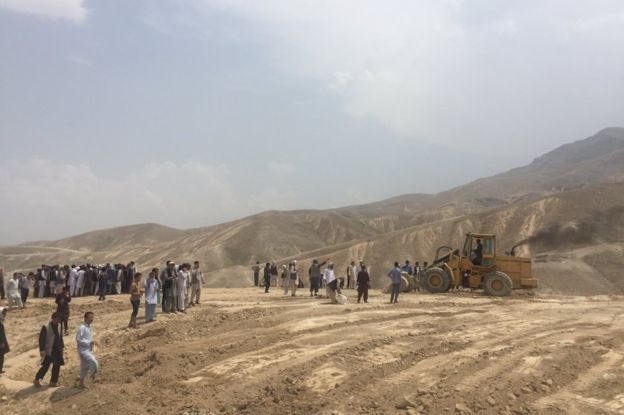 Who are the Hazaras?

Of Mongolian and Central Asian descent

Thought to be the third largest ethnic group in Afghanistan

Estimates suggest they make up 15-20% of Afghanistan's population, which is thought to be about 30 million

At least 600,000 Hazaras live in Pakistan, most of them in Quetta

Legend has it they are descendants of Genghis Khan and his soldiers, who invaded Afghanistan in the 13th Century