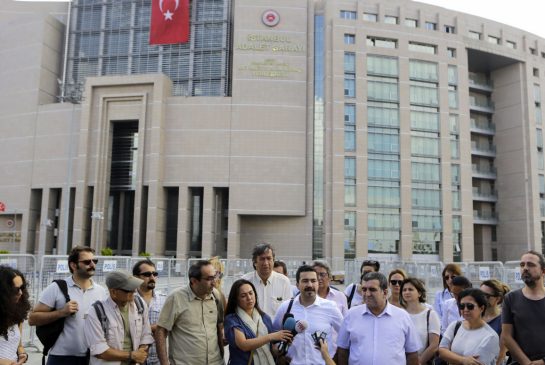 Television footage showed police leading the journalists to the courthouse in Istanbul. They are among 42 for whom detention orders were issued Monday, while authorities are searching for those still at large, the state-run Anadolu agency said.

Turkey declared a state of emergency following the failed coup that caused 290 deaths. The clampdown targets those suspected of ties to U.S.-based Muslim cleric Fethullah Gulen, whom the government accuses of masterminding the plot. Gulen has denied any knowledge of the attempted coup.

Nearly 16,000 people have been detained over alleged links to the uprising. Tens of thousands of civil servants have been dismissed for alleged ties to Gulen, according to Anadolu, from sectors including the judiciary, education, health care, local municipalities and ministries. 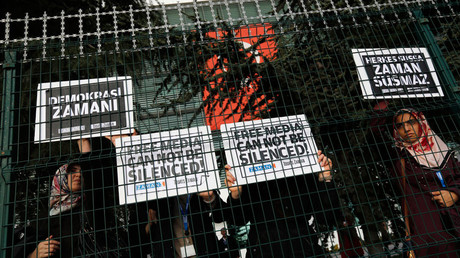 "If we hadn't removed the people this coup attempt would have been successful," Foreign Minister Mevlut Cavusoglu told reporters in Ankara Friday, speaking about the crackdown. "Every state has to take its own measures to ensure that it does not come face to face with such a threat again. No state would allow such a threat to remain in its midst."

Authorities have issued warrants for the detention of 89 journalists in total. Dozens of media organizations, mostly linked to Gulen, were ordered to close Wednesday night.

"These journalists worked in media organizations that belonged to this terror organization," Cavusoglu said.

"They were not only engaged in journalistic activity, they were engaged in activities that included the fabrication of evidence that served (the Gulen movement)," he said. "We need to make a distinction between those who cooperate with those who carried out the coup, those who supported it and the real journalists."

The foreign minister said that

"if they are engaged in a crime, they cannot be untouchable or exempt from prosecution. That's what we believe, but we will continue to defend freedom of press and freedom of expression till the end."

Investigations into people's relations with the Gulen movement, "the financial support they provided and their participation in other activities are continuing," the minister said.

"All politicians, including the president, were on a death list. We are forced to take these measures," he said.

On Friday, the EU affairs ministry suspended 16 people and dismissed six others as part of the investigation into the Gulen movement, while the public prosecutor's office in the Aegean coastal town of Izmir issued orders for 203 police personnel to be apprehended, Anadolu said.

Teams from the Izmir Police Department Counterterrorism Bureau conducted simultaneous operations around the city and had apprehended several suspects, the news agency reported.