Turkey’s Erdogan to drop lawsuits against people who insulted him 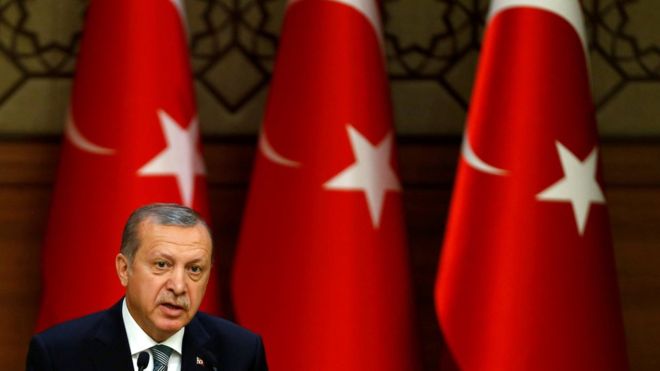 Turkey's president has said he is withdrawing all lawsuits against people charged with insulting him.

Recep Tayyip Erdogan said he was inspired by the feelings of unity in the wake of the recent failed coup.

But he also stepped up his attacks on nations criticising his crackdown in the wake of the coup attempt, telling them to "mind your own business".

He earlier blasted US Gen Joseph Votel, head of US Central Command, saying he was "on the side of the coup plotters".

Gen Votel had said in remarks on Thursday that the jailing of some military leaders could damage Turkish-American military co-operation.

'Cannot be our friends'

Mr Erdogan said at the presidential palace: "I am going to withdraw all the cases regarding the disrespectful insults made against me." 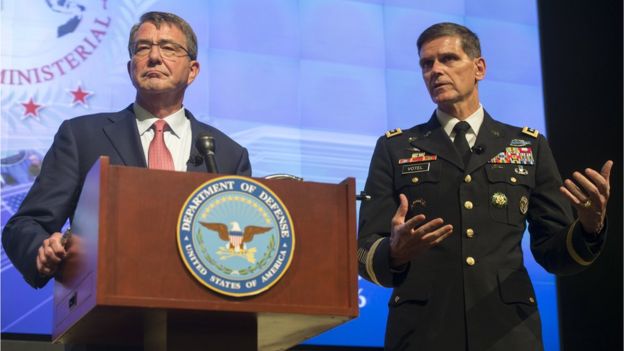 He said it was a one-off gesture of goodwill.

Earlier this year, authorities said some 2,000 people were facing such prosecutions.
But Mr Erdogan was also defiant in the face of criticism over his crackdown, which the interior ministry said on Friday had seen 18,000 detentions.

He said: "Some people give us advice. They say they are worried. Mind your own business! Look at your own deeds.

"Not a single person has come to give condolences either from the European Union… or from the West… Those countries or leaders who are not worried about Turkey's democracy, the lives of our people, its future — while being so worried about the fate of the putschists — cannot be our friends."

Speaking at the same event, PM Binali Yildirim said Turkey had now succeeded in removing all elements linked to US-based cleric Fethullah Gulen from the military.

Turkey blames Mr Gulen for orchestrating the coup attempt, something he denies. 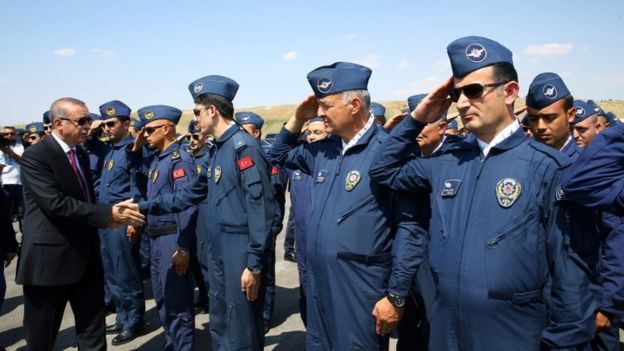 Earlier on Friday, President Erdogan had told Gen Votel to "know your place", adding: "You are taking the side of coup plotters instead of thanking this state for defeating the coup attempt."

Gen Votel had said on Thursday: "We have certainly had relationships with a lot of Turkish leaders — military leaders in particular. I am concerned about what the impact is on those relationships as we continue."

Replying on Friday after President Erdogan's comments, Gen Votel said any reports that he was involved in the coup were "unfortunate and completely inaccurate".

He added that Turkey had been an "extraordinary and vital partner" for many years and he was looking forward to their partnership in the fight against self-styled Islamic State.

US national intelligence director, James Clapper, had also said on Thursday that Turkey's crackdown was disrupting Turkish-American military co-operation in fighting IS.

Turkey announced a military reshuffle on Thursday evening, including the dishonourable discharge of 1,700 military servicemen. About 40% of generals and admirals have been discharged since the coup.

More than 66,000 public sector workers have been dismissed from their posts and 50,000 passports cancelled, while the labour ministry is investigating 1,300 of its staff.
The state has also shut 142 media outlets and detained several journalists.