Could you get into in trouble for using the hashtag #Rio2016? It depends on who, or what, you are.
For ordinary people the answer is a definite no. You can use it in posts about your favourite athlete as much as you like.
But for companies it's a different matter. And the United States Olympic Committee has been accused of "bullying" firms that aren't official sponsors, to prevent them joining in the social media conversation about the upcoming games.
Like any major sporting event the organisers of the Olympics go to huge lengths to protect the rights of corporate sponsors who invest over a billion dollars in the games.
Ahead of London 2012 they even briefly banned those working on the opening and closing ceremonies from buying chips because McDonalds had signed an exclusive sponsorship contract to be the only chip retailer in the park.
But since then, new regulations have allowed them to go even further in their quest to guard the Olympic image. In 2013 the first US applications to trademark hashtags started being submitted. And while it's impossible to stop ordinary people talking about the event online using registered hashtags, it is now possible to restrict what companies do.
Olympic organisers duly added hashtags to a list of trademarks they had already secured including the use of Rio 2016 to promote chemical products, varnishes and even egg incubators. 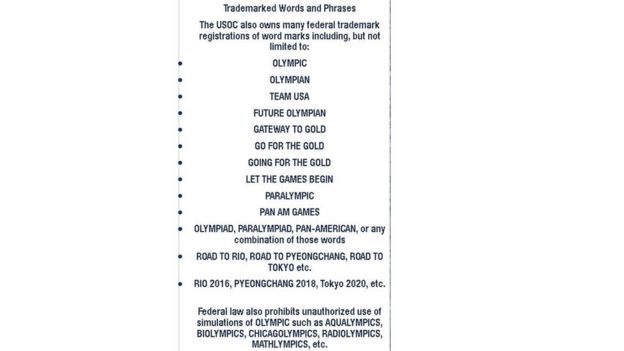 Now the Sports TV network ESPN has revealed that the USOC sent letters out to several companies in advance of the Rio Olympics warning them that their online accounts should not reference any Olympic results, share or re-tweet anything from the official Olympic account, or use official hashtags including #Rio2016 and #TeamUSA."
It's part of an attempt to prevent so-called 'ambush marketing', where companies who haven't paid for Olympic rights slyly associate themselves with the games in an attempt to gain additional attention for their products. Criticism has come, however, because the hashtags they have trademarked are so broad — there's likely to be a huge social media discussion about the events in Rio — and many would argue that companies are not advertising if they want to simply wish Team USA good luck.
Eric Goldman, a Professor of Law at Santa Clara University, thinks the USOC approach is overly aggressive and ridiculous. He told us "I think that trying to tell companies that they can't use the hashtag #Rio2016 or #TeamUSA in their tweets, most of the time they're going far afield of what the law permits and when companies use the ambiguities of trademark law to try and squelch socially beneficial conversation, I call that bullying."
Some of the companies targeted by the USOC say it's being too heavy handed. But Sally Bergesen, who runs the clothing company Oiselle has raised another issue. Oiselle got in trouble with the US Olympics Committee after posting a photo of one of the runners they sponsor, just as she qualified for the Olympics. The problem? The athlete was wearing her running number which happened to feature a tiny image of the Olympic rings.
As a result Oiselle received an email from the USOC that said the post constituted Olympic advertising and that the public might get the impression that the company was an official sponsor. Sally says the email ordered Oiselle to remove the photo within 24 hours. Though at time of writing it remains online. But the company has blacked out parts of other Olympic photos in its account.
Sally says her company, and others like it, sponsor and support athletes for the whole of the four year cycle, when attention is minimal. Yet the money they invest isn't recognised by the Olympics once they've helped them reach their goal she argues.
"We estimated that it costs about $300,000 to get an athlete to the Olympics, and the USOC contributed probably about 1% of that cost," she says. "So in my mind, we're more of an Olympic sponsor than they are at this moment. They might have a beautiful stadium, but if it's just about beautiful stadiums and no athletes then I don't think very many people would come and watch."
Sally is arguing for long-term sponsors of individual athletes to be given more branding rights and she's got a surprising ally — the athletes themselves. Nick Symmonds is a US middle distance runner and two time Olympian. He's campaigned against the Olympic Rule 40 which also restricts what sportsmen and women can post on social media during their time in the spotlight.
"I know several athletes that posted pictures of their shoes, or posted pictures of the hospitality suites that they were at and were asked to remove those pictures or be threatened with losing their credential and being kicked out of the village…It cheapens the investment that the sponsors have made in that athlete, if I go out to Rio and Brookes [Nick’s sponsor] has invested hundreds of thousands of dollars to get me there, it's my obligation to thank my sponsor."
The USOC told the BBC: "Corporate social channels, that are not official Olympic partners, should not engage in ambush advertising. That is what we have communicated to those companies. Rule 40 from the Olympic Charter is clear and US trademark law is as well."
The International Olympic Committee, who support the USOC's initiative, told us "The IOC and its partners in the Olympic Movement take the threat of ambush marketing very seriously. Our aim is to protect the integrity of the Olympic symbols, the Olympic Games, and the investment of our official partners. Without the revenue and support of our broadcast partners and official marketing partners the Olympic Games would simply not happen.
"Where there is an infringement we take a pragmatic approach to ensure there is an appropriate response. However if a company makes a concerted effort to create an unauthorized commercial association with the Olympic Games or the Olympic properties then we will take swift action, and if necessary legal action. "
Arguments about which companies have earned the rights to talk about the Olympics online are sure to continue, the next few weeks will show us whether organisers are willing to go further than just writing warning letters to companies who join in the Olympic conversation.