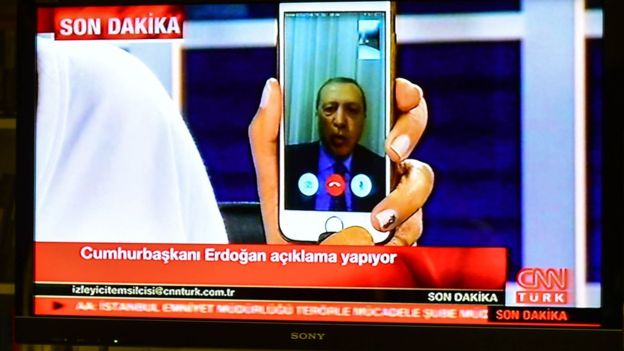 Turkey says it has captured all but one of the soldiers accused of trying to seize the president during last month's failed coup.

Special forces arrested another 11 soldiers overnight after a two-week manhunt near Marmaris.

Recep Tayyip Erdogan was on holiday at the resort in south-west Turkey on the night of the coup attempt, but fled before his hotel was raided.

The fugitives were located in a forested area, reports say.

Since the failed putsch Mr Erdogan has targeted people suspected of links to those involved.

Tens of thousands of people have been detained, or dismissed or suspended from roles in the military, judiciary, civil service and education.

Over the weekend Mr Erdogan announced a sweeping reform of Turkey's armed forces to bring them under full civilian control.

Turkey has summoned Germany's charge d'affaires to the foreign ministry in Ankara to explain why Mr Erdogan was prevented from addressing a rally in Cologne via a video-link on Sunday.

At least 30,000 rallied in the German city in support of the Turkish president.

Cologne police had initially banned the organisers from erecting a large video screen at the demonstration. This ban was partially overturned by a regional court, which ruled that a large screen could be used, but only to relay the speeches of people physically present at the rally.

The right to freedom of assembly did not apply to "the delivery of opinions by a member of a foreign government or head of state via video-link," the court found. 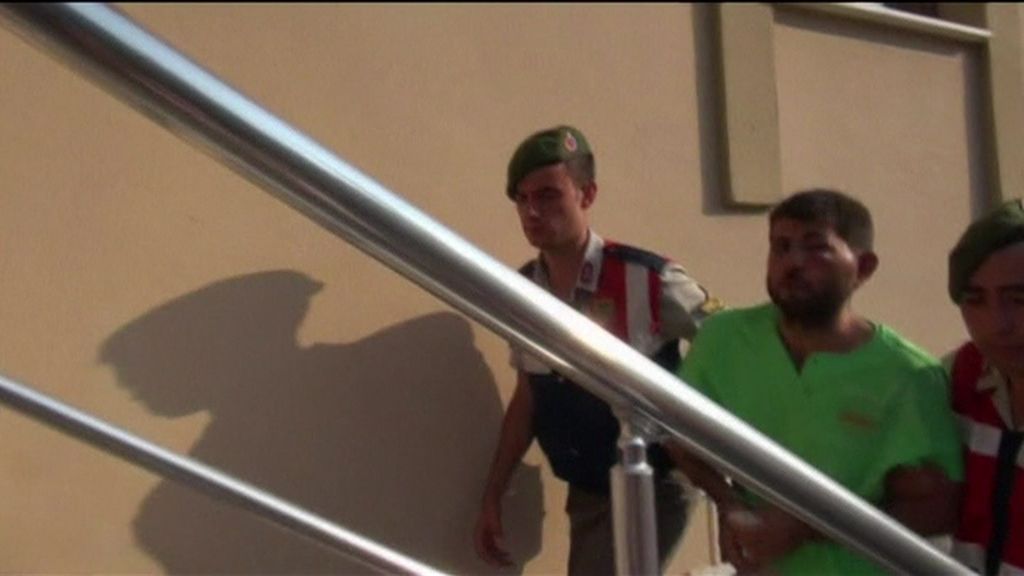 Germany's highest court confirmed the ruling after an appeal.

Turkish authorities accuse US-based preacher Fethullah Gulen of being behind the coup attempt, something he denies.

The rebel soldiers were spotted by villagers hunting boar in the forested area near Marmaris. Gunfire was exchanged during the operation but no casualties were reported.


The soldiers arrested overnight on Sunday and Monday morning include Major Sukru Seymen, the alleged commander, according to Anadolu news agency.

More than 20 other members of the military squad suspected of involvement had already been remanded in custody to face trial, the agency reports. 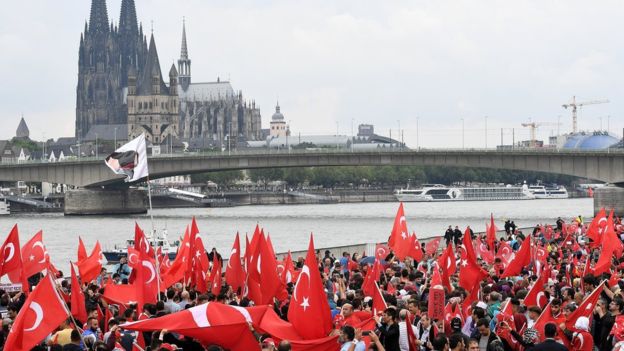 During the coup attempt on 15 July Mr Erdogan spoke live on TV via his mobile phone. He said he had narrowly escaped an attempt on his life.

According to official reports, the president's security team was tipped off that a squad of soldiers was heading to his hotel and moved him.

Turkey's interior minister said on Friday that more than 18,000 people had been detained over the failed coup. More than 9,000 of them have been formally arrested.
Nearly 50,000 Turkish citizens have had their passports cancelled, Efkan Ala told state TV.

Analysis — By Jonathan Head in Istanbul

The sweeping reforms of the armed forces announced by President Erdogan could put the military under full civilian control for the first time in the country's modern history, with the aim of preventing future coup attempts.

However, dealing with the movement the government blames for instigating the coup will be a more complex task.

Millions of Turks are believed to be followers of the exiled Islamic preacher Fethullah Gulen, many of them successful and influential.

More than 60,000 have already been dismissed from state employment; more than 3,000 military officers with suspected links to the preacher have also been sacked.

But eliminating them from other areas like business would require a purge on a massive scale, something Turkey's fragile economy may not be able to sustain.