ATTACK OF THE DRONES: Why does Government back this flying nuisance despite terror fears? 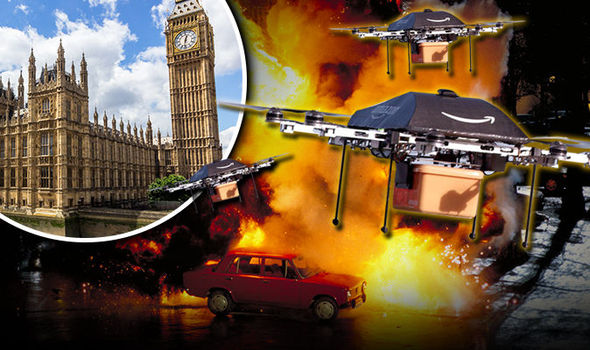 THEY are a flying nuisance posing a serious terror threat, exposing Britons to burglars and are a huge hazard in the sky — but why is our Government continuing to back drones?

US e-commerce giant Amazon was recently given the green light to launch drone test flights across the skies of Britain by Government ministers in its bid to deliver parcels to your doorstep in just 30 minutes.

In gleaming adverts, Amazon Prime Air battery-powered drones land on lawns delivering British online shoppers their buys at the click of a finger.

Despite approval from British ministers, it hasn’t been so easy in America where the gift giants drones failed to get the get the go ahead after the White House ruled every drone should have its own pilot or air controller and the device had to stay within sight of the pilot.

And the proposal won’t be so popular here in the UK where the usage of a pesky drone is also a controversial subject.

Some critics warn drones filling our skies could actually sacrifice our privacy and safety.

Sara Ogilvie, Policy Officer for human right group Liberty, suggested drones could be a “spying tool” for beady-eyed burglars looking for their next unsuspecting house to target or depraved terrorists armed with weapons.

She told Express.co.uk: "As this technology continues to develop at breakneck speed, public debate about drone use becomes ever more pressing.

"Individuals, police and businesses are employing drones for an ever-growing range of purposes – despite the huge risks this entails for a broad range of our human rights.

“Drones can be picked up on the high street and have the capacity to be operated as deeply invasive spying tools or weapons.

“The implications for our privacy, safety and security are all too clear.”

One security expert even warned Amazon delivery drones could be hacked and turned into killing machines.

Colin Bull, a consultant at Software Quality Systems, said drones should be “embraced and feared in equal measure”.

Meanwhile, former head of the navy Admiral Lord West of Spithead warned the barbaric Islamic State (ISIS) could use drones to carry out terror attacks in the UK. 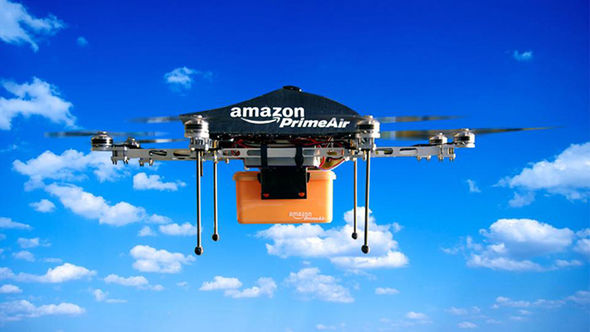 The former security minister said if the terror group was using the technology in its heartlands it was likely to use drones in the West — where they are more readily available in shops.

He said: "If they are using them there, then in fact they are probably even easier to use them here because you can get them so much easier.

“You can pop into any store and buy them. Therefore I am very concerned."

The Civil Aviation Authority (CAA) has its work cut out regulating the ever-moving technology in its flight paths to ensure they do not crash into other moving objects in the skies.

However, the CAA has no clear policy concerning delivery drone airspace. 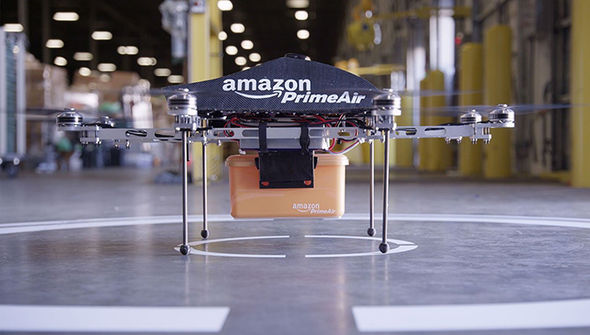 Although it remains unknown how many successful prosecutions the CAA has brought against users, the punishments are costly.

One owner, Richard Brunner, was slapped with a £1,000 fine for flying his drone in London’s Hyde Park.

Amazon denies it will have a negative impact on people’s privacy, simply saying: “We’re not in the business of surveillance.” 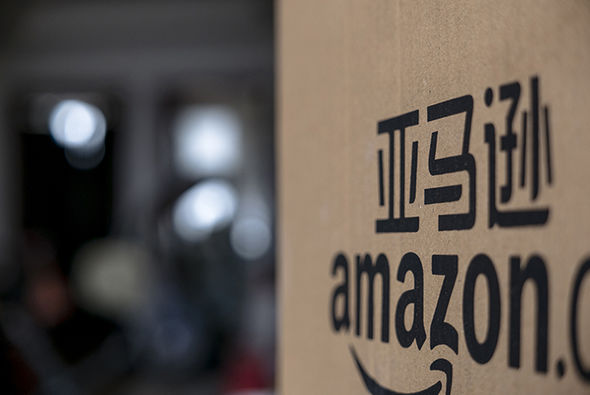 And the Home Office has brushed off concerns over Amazon drones, with the Department of Transport saying: “For the potential of drones to be realised, the public will need to be confident that their operation is safe an meets our ecpections on privacy.

“Drones are an emergency technology bringing significant economic benefits, which is why the Government is working with international bodies on a shared regulatory framework.”