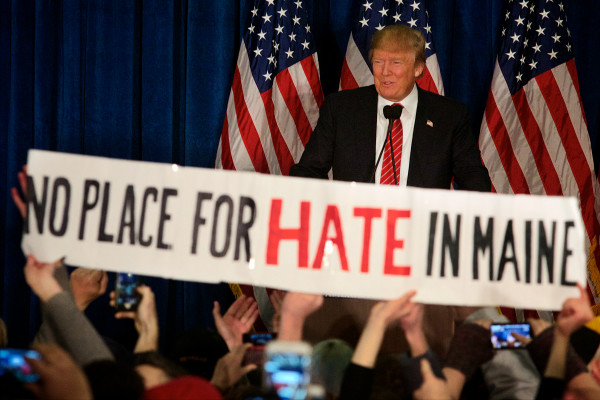 PORTLAND, MAINE — 03/03/16 — A protestor unfurls a banner at a Donald Trump campaign rally in Portland on Thursday. The proceedings were interrupted four times by similar protests. Troy R. Bennett | BDN

The affair was murky enough even before Donald Trump got involved.

Why did the US government authorise the transfer of $400m (£305m) in cash to Iran at the same moment that four American captives were released by the Iranian government?

Even the US Justice Department objected to the timing of the payment, according to a report in the Wall Street Journal.

"People knew what it was going to look like, and there was concern the Iranians probably did consider it a ransom payment," the Journal quoted a person "familiar with the discussions" as saying.

"It's so sad, so disgusting," the Republican presidential nominee said on Thursday as he campaigned in the north-eastern state of Maine.

But rather than focusing solely on the fact of the payment — reportedly made in euros, Swiss francs and other currencies — and the apparently suspicious timing, Mr Trump went further, first when addressing a rally in Florida on Wednesday.

"I don't think you've heard this anywhere but here," began Mr Trump, before setting out his claim that the Iranian military had filmed the $400m being taken off an aeroplane and then released the tape to embarrass the United States.

Immediately people began to wonder what he was talking about. No-one in the media could remember seeing or broadcasting such a tape, about which Mr Trump was remarkably specific. 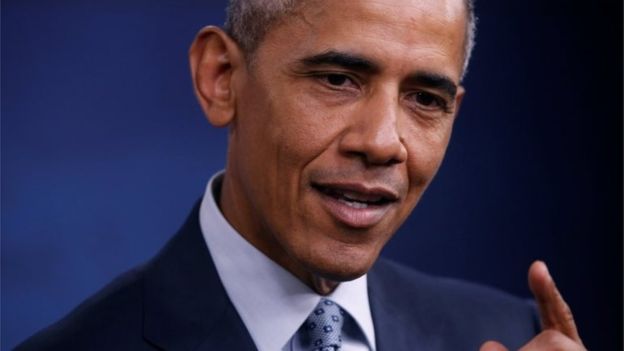 "They have a perfect tape, done by obviously a government camera," he explained, "and the tape is of the people taking the money off the plane, right? That means that in order to embarrass us further, Iran sent us the tapes, right?

"It's a military tape; it's a tape that was a perfect angle, nice and steady, nobody getting nervous because they're gonna be shot because they're shooting a picture of money pouring off a plane."

Even Mr Trump's spokeswoman Hope Hicks appeared to believe that her boss had been mistaken.

Ms Hicks told the Washington Post that the candidate had been referring to old footage shown "on all the major broadcasts this morning", a reference, apparently, to grainy pictures, shot in the Swiss city of Geneva, showing not money but shadowy figures disembarking from a plane.

(By Friday morning Mr Trump echoed his campaign, tweeting: "The plane I saw on television was the hostage plane in Geneva, Switzerland, not the plane carrying $400 million in cash going to Iran!")

The footage, attributed to the Agence France Presse news service and dated 17 January, purported to show the arrival of a "Falcon 900 of the Swiss Air Force, believed to have been carrying the former prisoners," according to the information provided with the feed of the pictures to the BBC at the time.

Several people are seen disembarking from the plane but there is no sign of any money, and the footage is clearly from Geneva, not Tehran.

And so, it seemed, Mr Trump was wrong.

And yet on Thursday, with the ink barely dry on his spokeswoman's explanation in the press, Mr Trump began to repeat his claim all over again.

"A tape was made, right, you saw that, with the aeroplane coming in, nice plane," he told an event in Portland.

"And the aeroplane coming in and the money coming off, I guess, right.

"Who would ever think that they would be taking all of this money off the plane and then providing us with a tape. It's only for one reason and it's very, very sad," said Mr Trump.

So, whether or not he has seen it, does any footage of the money transfer exist?
We asked the BBC Monitoring team, which examines and interprets media around the world, if they could find any such video.

The nearest they came up with was from a documentary called "The Rules of the Game" which was broadcast on Iranian state TV in February.

Shots of an airport are accompanied by commentary which references 17 January in Tehran's Mehrabad Airport.

There is also a shot of a loaded crate, partially blurred out, but it is far from clear whether or not this is a crate of cash, let alone whether it is the money in question.
A translation of the commentary with the pictures reads as follows.

"Early hours of 17 January 2016, Mehrabad Airport (Tehran), $400m cash was transported to Iran by an airplane.

"A little bit later, part of the interest money was also paid to Iran, and the US government made a commitment to pay the rest of Iran's money."

It is not clear if this is intended to be a literal description or whether the shots are just general views of the airport.

In any case, whether or not these pictures show the transfer of the cash, they do not appear to match Mr Trump's description of what he says he saw, nor his spokeswoman's explanation.

At a news conference in the Pentagon, US president Barack Obama did not address the video issue — but he denied there was a direct link between the payment and the prisoner release insisting that "this wasn't some nefarious deal".

Mr Obama pointed out that the payment had been announced by the White House in January as part of a settlement of a claim before an international legal tribunal which related to funds which had been frozen since 1981.

The $400m in cash, he insisted, was part of a $1.7bn settlement, paid on the advice of lawyers who warned that the US was likely to lose the case and could then be liable for payments running into billions of dollars.

The president said the timing of the deal was coincidental in the sense that a reopening of negotiations with Tehran had led to progress on a number of issues at the same time, including the prisoners, a deal to try to prevent Iran developing a nuclear bomb and the out-of-court settlement.

"We do not pay ransom for hostages," said Mr Obama, "we didn't here and we won't in the future."

It was a forthright denial but many Americans will not be convinced, trust in both Mr Obama and Mr Trump being in short supply among both men's opponents.