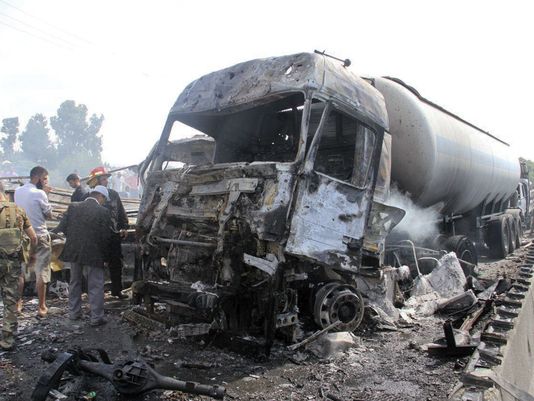 As the U.S. and Russia struggle to negotiate terms of a cease-fire in Syria, the five-year civil war has unleashed such an array of fighters that some forces are both allies and enemies, depending on which groups they encounter on the battlefield.

To understand the complexities of a war involving more than a dozen local militias and foreign nations, here is a rundown on the combatants, their goals, their allies and their enemies:

Syrian President Bashar Assad's domestic allies include his his clan of minority Alawite Muslims, other religious communities, foreign Shiite fighters backed by Iran and Russian help in the form of supplies and air support. His main fighting forces include:

Syrian Armed Forces — The Syrian army has been worn down by five years of fighting, while the Syrian air force remains a potent force.

National Defense Forces — This is a paramilitary organization established with Iranian support to hold and control territory.

The al-Qaeda offshoot has seized territory that spans the Syrian-Iraqi border. Most of its revenue is generated from kidnapping, taxation and oil sales. Seized weapons help replenish stockpiles.

Its fighters include local militants and recruits from across the Arab world, Europe and elsewhere.

Its enemies include Kurdish militias, an al-Qaeda group known as the Nusra Front, a U.S.-led coalition and sometimes Assad and Russia.

The U.S. military has stitched together an alliance of Syrian Kurdish and Arab forces to fight the Islamic State. It is led by the YPG, the Syrian arm of the Kurdish Worker’s Party (PKK) in Turkey, which both Turkey and the U.S. State Department consider a terrorist organization.

Allies include the USA in the fight against the Islamic State. The group has also worked with Russia at times and has maintained relations with the Syrian government, which shares some territory.

Enemies include the Islamic State, the anti-Assad Syrian opposition and Turkey, which fears Kurds will carve out an independent enclave along the Syrian-Turkish border.