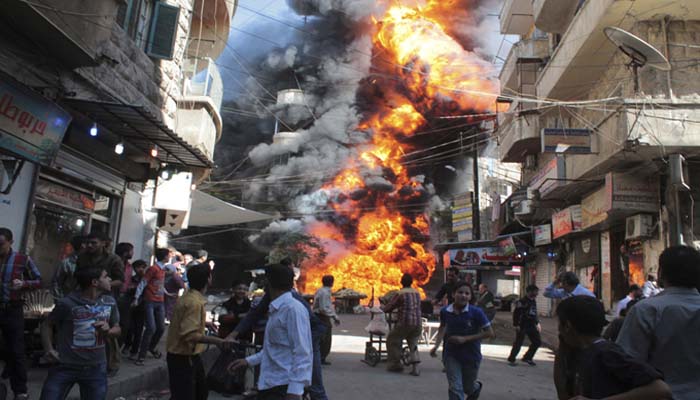 Damascus, Oct 14 (Prensa Latina) The Front for the conquest of the Levant, formerly Al-Nusra, threatens to kill anyone attempting to abide by the process of reconciliation in Aleppo, as reported by military sources.

About two thousand armed men intend to cease hostilities and use the humanitarian corridors enabled in this city, 350 kilometers north of Damascus, but the members of what was al-Nusra have mined them and employ snipers.

We tested it, we tried to evacuate some of them from the eastern neighborhoods of the city, but extremists of the front aborted any attempt and prevent any negotiations with members of the National Reconciliation Commission, they said.

What drives the armed men to communicate with the competent authorities to leave Western Aleppo is the increase of the popular pressure on them, whose 'popular incubator' has begun to collapse, as they told Prensa Latina.

The sources said that more than two thousand armed men communicated with the competent parties in recent days in order to be guaranteed safe passage with their families through the humanitarian corridors established by the Government of the province.

Videos and statements on social networks reported that 50 percent of the armed irregulars wish for reconciliation but fear the threats of the Front, who publicly promised to liquidate anyone who does it.

On the other hand, helicopters of the Syrian military intensified the launch of pamphlets on the eastern neighborhoods of the city, calling to overcome 'their fears and cross the corridors to normalize their legal status' and advance the peace process.

Without any irony, the sources stressed that in addition to the pamphlets and Syrian flags, the military launched razors and soaps, following information received that many of the defecting irregulars wish to shave off their beards before turning themselves in.