McGregor Diaz Third Fight — To be! Nate Gives His Honest Take After UFC 205 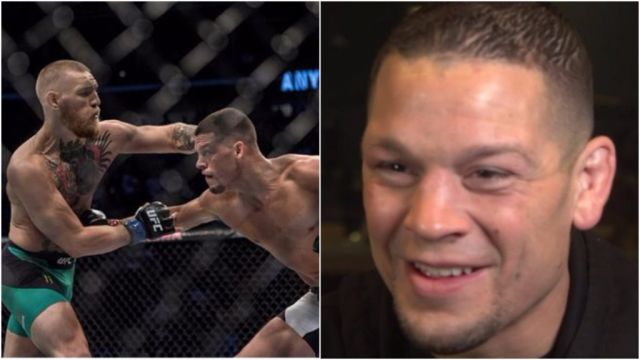 Nate Diaz has revealed that the UFC didn't want to give him tickets to UFC 205, and he ended up watching Conor McGregor's victory over Eddie Alvarez from corporate seats at the top of Madison Square Garden.

Speaking to Brett Okamoto of ESPN, Diaz was surprisingly measured in his breakdown of McGregor's victory, but like many of his fellow UFC fighters, expressed that he feels somewhat cast aside by the organisation in light of McGregor's lightweight title shot in New York:

It's a little bit unofficial, it's handed over. Good timing for him and he did everything right and they handed it right to him. It was funny how I got left out the picture though. He went through the fight like I expected he would, especially against that guy. I thought the fight would go exactly how it went. I figured that. Then as soon as the fight's over, I see like 100 people just turned around and staring at me like what do you want me to do?

The UFC, they didn't even want to give me tickets to this fight. I think they wanted to just put this picture of him with the belts and it's the greatest thing that ever happened. They want to kind of like keep me out of the mix and hide me out from the whole thing. It might have been in his contract, 'don't let Nate Diaz in here'. I was up in the stands in the seat in the club box. After the fight, everybody's turning and looking at me. It's not my call. These guys are hiding me out up here. I think they gave Nick Jonas my seat.

If three was a set for the Jonas Brothers, what of a potential third fight, and rubber match, with the new lightweight champion?

Diaz, despite expressing that he wants the fight, claims he won't beg the UFC for it, explaining that he's content in believing he won the pair's first two fights. He's also slightly mystified at the UFC and media's depiction of 'The Notorious' as the organisation's greatest fighter ever for the same reasons.

The UFC knows that's a bad idea for him, too.

Congratulations to Conor, he did a great job, got the two belts. Me and him know what happened the last couple of fights. That greatest of all time stuff, that just needs to come to an end cause I don't remember any of the greatest of all time getting worked over like the last two fights. So not to sit here and bash, but that's how I feel about the whole situation.

Something tells us we'll see it whether he begs for it or not.