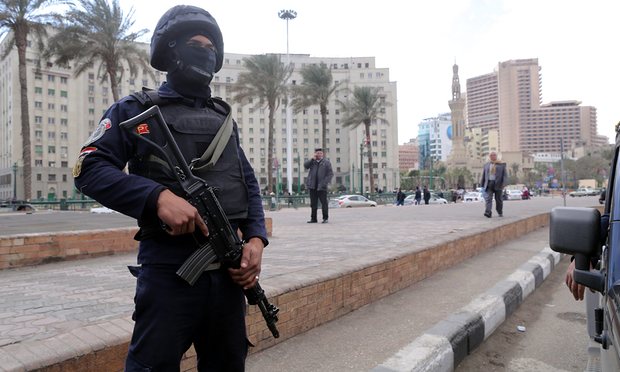 Egypt’s public prosecutor is to bring nearly 300 suspected Islamic State militants before the country’s military judiciary in one of the biggest trials of alleged violent extremists in recent years.

Isis has generally steered away from ambitious plots to assassinate such high-profile figures as Sisi and Bin Nayef, who is also Saudi Arabia’s minister of the interior. It is unclear whether these alleged efforts – which date back to 2014 – had the sanction of senior commanders of the group.

The 292 suspects in the coming mass trial are accused of belonging to 22 cells and carrying out 19 attacks in total, including the killing of three judges who were overseeing a parliamentary election in restive northern Sinai, which borders Gaza, Israel and the Suez Canal.

Almost all are alleged to be members of the Wilayat al-Sinai, Isis’s Egyptian affiliate; 151 are in custody, seven are out on bail, and the rest on the run.

According to prosecutors, the suspects include members of a network consisting of six former police officers and a dentist, who plotted to kill Sisi in Egypt by targeting his motorcades, while a linked cell, based in Saudi Arabia, wanted to strike in a hotel in Mecca where they mistakenly thought Sisi would be staying on a pilgrimage to the holy city.

The network, active in 2014, included some Egyptians working in the kingdom and a number of other attackers who travelled from Egypt to execute the plan, according to official documents.

The conspirators are said to have planned a suicide bombing by the wife of one of the members at a holy site in Mecca to distract security forces while they targeted both Sisi and the Saudi prince.

The police officers involved in the network had clashed with authorities in 2012 when they grew beards, in accordance with their strict interpretation of Islamic custom, and had been shifted to reserve forces before becoming involved in violent extremism, officials said.

Authorities in Egypt have been accused repeatedly of fabricating or exaggerating charges against political opponents.

Mokhtar Awad, an expert in militancy in Egypt at George Washington University, Washington DC, said the claims of a double conspiracy to kill Sisi and Bin Nayef were credible.

“It may seem far-fetched but there have been reports about this plot for some time and the government is unlikely to implicate former [police] officers if there was no substance to it,” Awad said.

There have been a series of mass trials of alleged extremists in Egypt. Three major trials involved hundreds allegedly linked to jihadi groups in Egypt, while others have targeted members or supporters of the Muslim Brotherhood, Egypt’s oldest Islamist organisation.

The trials have drawn fierce international criticism, while the imposition of a “collective” death sentence on hundreds of accused has drawn fierce condemnation from the United Nations, EU and international campaigners. The US state department described mass verdicts as “unconscionable”.

Hisham Hellyer, an analyst at the Royal United Services Institute (Rusi) in London, said suspects in the coming trial “shouldn’t expect much leniency” as “the Egyptian state has a record of very tough sentences when it comes to [Isis] types”.

Campaign groups say torture and mistreatment is widespread in Egyptian prisons, and many convictions are based on false confessions. Accused are frequently detained without charge for long periods and denied access to legal representation.

Authorities say tough measures are needed in the face of an insurgency that has killed hundreds, including large numbers of policemen and soldiers. Egypt faces a “ferocious war against terrorism and extremism”, Sisi said last year.

Although violence there has been overshadowed by that in Iraq and Syria, Egypt remains of critical strategic importance to Isis. The group made the country a key target in its bid to expand beyond strongholds in Iraq and Syria in the aftermath of the declaration of a new caliphate under leader Abu Bakr al-Baghdadi in June 2014.

Egypt has a history of Islamic militancy reaching back to the 1960s, and has experienced successive waves of extremism. Violence has intensified since 2013, when Sisi overthrew the previous president, Mohamed Morsi, leader of the Muslim Brotherhood, following protests against his rule.

Authorities then launched a crackdown targeting the Brotherhood and other opponents. Tens of thousands have been detained and thousands killed, according to analysts and rights groups.

A series of Islamic militant factions have since emerged, of which one, Ansar Beit al-Maqdis (ABM), pledged allegiance to Isis and adopted the name Sinai Province in 2014.

The new Isis affiliate claimed responsibility for destroying a Russian passenger jet full of tourists in October 2015. That attack came shortly after a failed attempt to seize a town in Sinai. Since then, the group has been under significant pressure.

“They are currently not as acute a threat as last summer but continue to be deadly. They’ve adopted a strategy of long-term attrition. On the mainland [beyond Sinai] they’ve had much more difficulty,” said Awad.

The efforts of Isis to establish a powerful presence in north Africa have met with mixed fortunes. Plots and small networks have been discovered in Morocco and Algeria, while the group has launched bloody attacks in Tunisia.