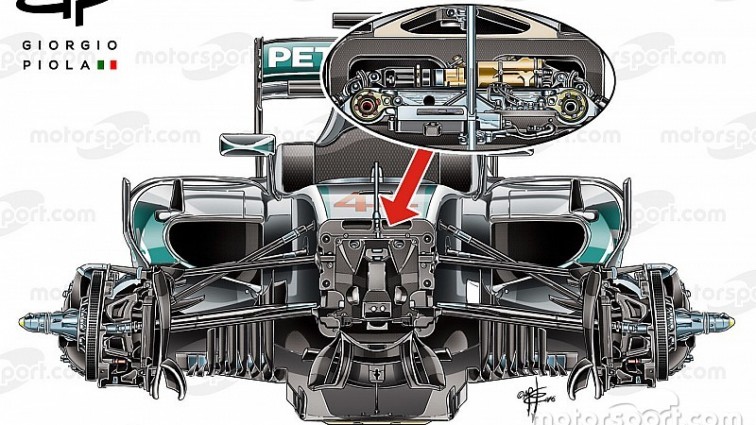 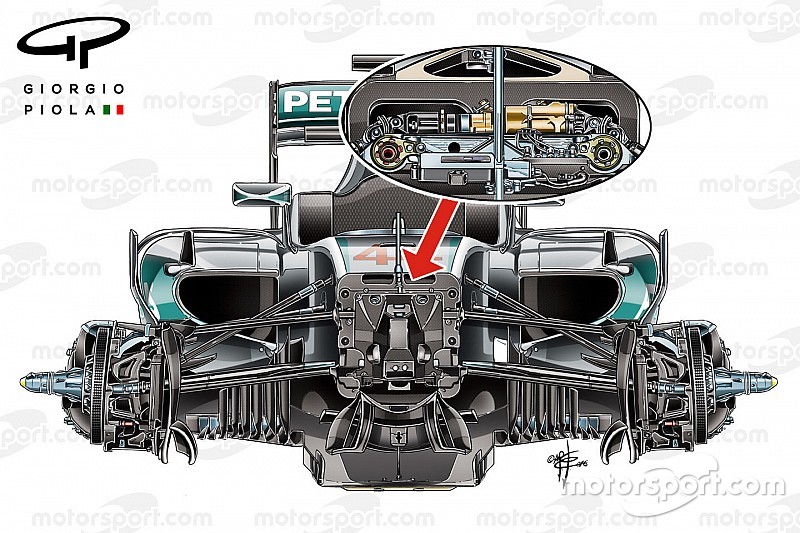 Leading Formula 1 teams could be forced to revise their suspension systems on the eve of the 2017 season amid a row brewing following a Ferrari query over trick technology that Mercedes has pioneered.

Even though the high-tech FRIC (Front and Rear InterConnected) suspension system was effectively banned in 2014, it has not stopped some outfits finding alternative ways to improve the handling of their cars.

Mercedes in particular has been at the forefront of developing fully-legal hydraulic systems to improve the overall stability of the chassis – which helps in braking and cornering – to assist in drivers’ ability to take more kerb, more aggressive driving lines and look after tyres better.

It has been achieved through the team placing a heave (or third suspension element) behind the rocker assembly to control vertical displacement of the suspension. Such an arrangement is mirrored at the back of the car too.

The benefits of the system were clear in 2016 – as Mercedes was so much better on tyre life – and it is believed that a number of outfits were preparing similar systems that took the technology even further.

Red Bull has made great strides in the past 12 months on understanding the dynamics of its own car too, having managed to exploit once again the radical rake angles that have been so integral to its aerodynamic concept.

But the suspension technology being considered has now been thrown into doubt after Ferrari queried the use of such concepts in correspondence with the FIA before Christmas.

As is common practice in F1, teams can write to the FIA to discuss whether or not it believes new ideas are legal – and if the FIA says they are not, then rival teams are informed to help them avoid pursuing the concepts themselves.

This system is also used by teams to try to clarify whether technology used by rival teams is legal too.

In the letter to F1 race director Charlie Whiting, Ferrari’s chief designer Simone Resta said that the team wanted to propose a system that could replicate FRIC without there actually being a physical connection between the front and the rear of the car.

The issue was whether or not these systems breached the catch-all Article 3.15 of F1’s technical regulations that effectively outlaws moveable aerodynamic devices, as they could help the car's aerodynamic characteristics.

In the letter that Resta wrote, a copy of which was circulated to all teams, he stated: “We are considering a family of suspension devices that we believe could offer a performance improvement through a response that is a more complex function of the load at the wheels than would be obtained through a simple combination of springs, dampers and inerters.

“In all cases they would be installed between some combination of the sprung part of the car and the two suspension rockers on a single axle, and achieve an effect similar to that of a FRIC system (Front Rear InterConnected suspension) without requiring any connection between the front and rear of the car.

“All suspension devices in question feature a moveable spring seat and they use energy recovered from wheel loads and displacements to alter the position of the heave spring.

“Their contribution to the primary purpose of the sprung suspension – the attachment of the wheels to the car in a manner which isolates the sprung part from road disturbances – is small, while their effect on ride height and hence aerodynamic performance is much larger, to the extent that we believe it could justify the additional weight and design complexity.

“We would therefore question the legality of these systems under Art. 3.15 and its interpretation in TD/002-11, discriminating between whether certain details are “wholly incidental to the main purpose of the suspension system” or “have been contrived to directly affect the aerodynamic performance of the car”.

Resta wanted the FIA to confirm whether suspension systems that had two characteristics were legal. They were concepts that exhibited either:

1) displacement in a direction opposed to the applied load over some or all of its travel, regardless of the source of the stored energy used to achieve this.

2) a means by which some of the energy recovered from the forces and displacements at the wheel can be stored for release at a later time to extend a spring seat or other parts of the suspension assembly whose movement is not defined by the principally vertical suspension travel of the two wheels.

In response to Ferrari, Whiting said that he believed that any suspension system that acted in such a way was not in compliance with the regulations.

Whiting said: “In our view any suspension system which was capable of altering the response of a car's suspension system in the way you describe in paragraphs 1) and 2) would be likely to contravene Article 3.15 of the F1 Technical Regulations.”

Although Whiting’s response would appear to outlaw the use of the trick suspension technology, it is understood that teams running similar systems have now queried the situation – which means discussions are ongoing about what is and is not allowed for 2017.

Any team running a device that could be interpreted as breaching the rules faces a dilemma though on whether to commit to it with its new car – and risk it being outlawed in a final ruling – or pursue an alternative system that may not be as competitive.