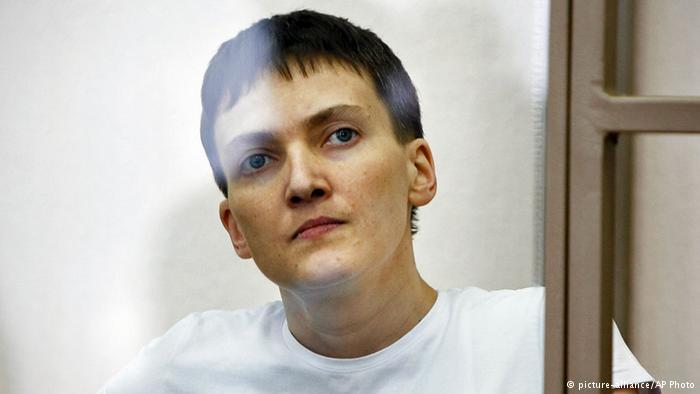 A Ukrainian pilot has been found guilty in Russia of charges relating to the deaths of two Russian journalists.

Nadiya Savchenko was sentenced to 22 years in jail after being convicted of directing artillery fire which killed them in eastern Ukraine in June 2014.

She burst into a folk-style protest song in the courtroom as she was finally pronounced guilty after the judge's two-day reading of the verdict.

She denied all the charges and her case has become internationally notorious.
Ukraine would never recognise the "so-called" verdict, President Petro Poroshenko said, describing the trial as "infamous".

In a statement (in Ukrainian), he added that he was ready to exchange Savchenko for two Russian soldiers detained in Ukraine for "their participation in the armed aggression" against the country.

Ukraine's foreign minister vowed to continue to fight for her release.
Scuffles were also reported in the courtroom after members of a Ukrainian delegation unfurled a national flag.

Russian prosecutors said Savchenko had been driven by "political hatred".

Western politicians have been among those calling for her release, echoing her lawyers' descriptions of the process as a show trial and a farce.

The hearing took place in the southern Russian town of Donetsk, not far from the Ukrainian border.

There was confusion on Monday at the start of the court session, when Russian state media announced the guilty verdict prematurely. 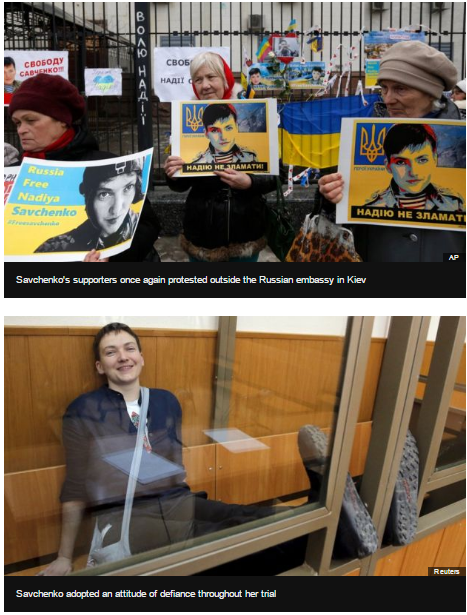 Savchenko, a pilot by training, was accused of having acted as an artillery spotter on the ground.

Her lawyer has argued that phone records prove she was captured by rebels before the attack, and that she was trying to reach fighters from her volunteer force who had been wounded in an ambush.

Savchenko's capture — or as she puts it, her kidnapping — contributed to the deterioration in Russia-Ukraine relations since 2014.

She was elected as a Ukrainian MP while in Russian detention.

Moscow annexed the Crimea peninsula in March 2014 after an unrecognised referendum on self-determination, and is accused of covertly supporting separatist rebels in the bloody conflict in the eastern Donetsk and Luhansk regions of Ukraine.