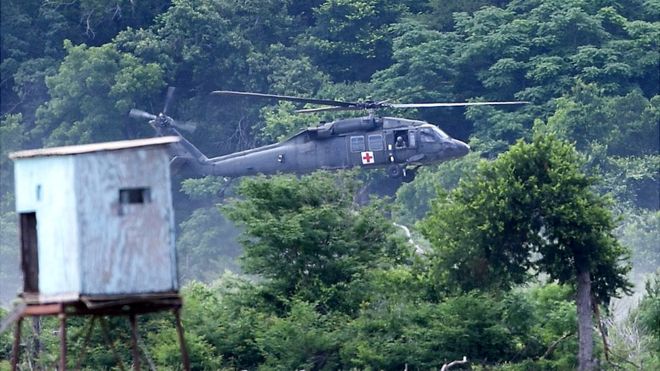 The bodies of four missing US soldiers have been recovered after their vehicle overturned while crossing a flooded riverbank at Fort Hood, Texas.

The discovery brings the death toll from the accident to nine.

Three soldiers were found dead shortly after the incident and two more bodies were recovered late on Thursday night.

Foot Hood officials said the 2.5-ton vehicle was conducting a routine exercise when it was swept away by the current amid heavy flooding.

Three of the occupants survived and were discharged from Fort Hood's hospital on Friday.

The four bodies were found downstream from the Owl Creek Tactical Crossing where the vehicle was swept away, said Maj Gen John Uberti, deputy commander at Fort Hood.

The army has not identified any of the victims while it notifies relatives.

"This tragedy extends well beyond Fort Hood and the outpouring of support from the country is sincerely appreciated," said Gen Uberti.

he Light Medium Tactical Vehicle was at a low-water crossing point when it was swept away, said Fort Hood spokesman Chris Haug.

The vehicle was in the "proper place for what they were training", Mr Haug said, adding: "It's just an unfortunate accident that occurred quickly."

News of the deaths comes as torrential rains and flooding continue to grip large swathes of Texas. May saw record-breaking downpours. At least six people have died as a result.

Gov Greg Abbott declared a state of disaster in 31 counties across Texas. Severe storms were expected to hit the state Friday and Saturday, intensifying floods caused by swelling waterways and rivers.