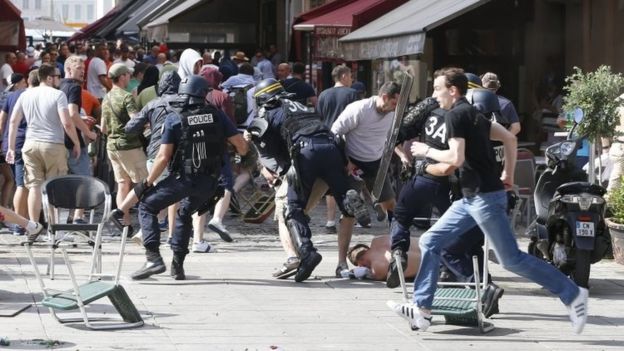 England fans have been embroiled in fresh clashes with police and rival supporters in Marseille ahead of the team's opening match of Euro 2016.


The latest violence follows two nights of trouble in the French city.

Police used tear gas for a third day on Saturday, and also a water cannon in an attempt to disperse the crowds.
Footage showed bottles being thrown and bloodied fans being given medical treatment. French police say one Briton was seriously injured in clashes. 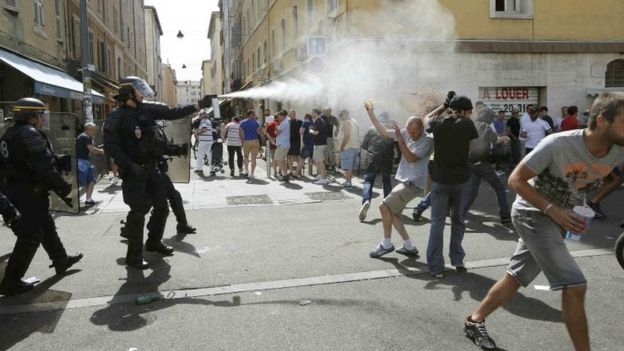 A police spokesman said the Briton had been resuscitated by officers, but gave no further details.
As the 20:00 BST kick-off for England's game against Russia neared, fans moved towards the Stade Velodrome venue, walking past ranks of police officers in riot gear.

The great majority of fans appeared to be peaceful but there were reports of a few scuffles outside the stadium.
European football's governing body Uefa said it "firmly condemns the incidents in Marseille", adding that "people engaging in such violent acts have no place in football".
Earlier on Saturday, shadow home secretary Andy Burnham had said England fans' behaviour was "embarrassing", given the terrorism threat to France. 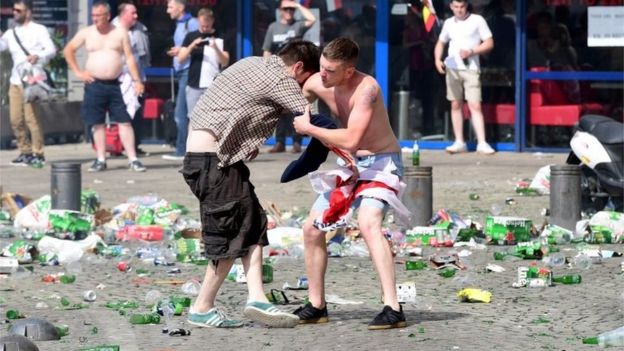 BBC News correspondent Nick Eardley, who is in Marseille, described the situation earlier as "pretty terrifying" as fans fought with Russia supporters.
He said he had witnessed bloodied England fans being "dragged away by police", to the sound of sirens blaring out across the city's main square.
Six arrested 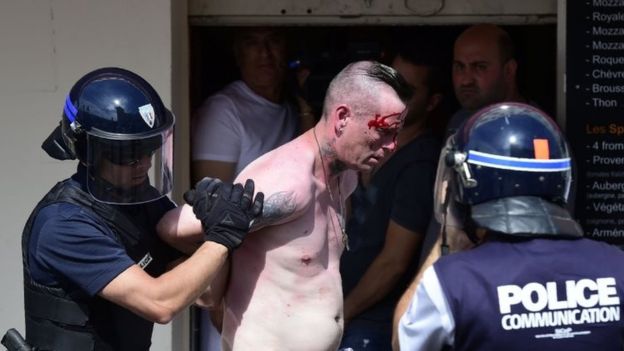 Police told the BBC that six people had been arrested and at least five had been injured during the scuffles.
Local police chief Laurent Nunez told AFP news agency: "Police intervened in a clash between English, Russian and French supporters in the Vieux Port district." 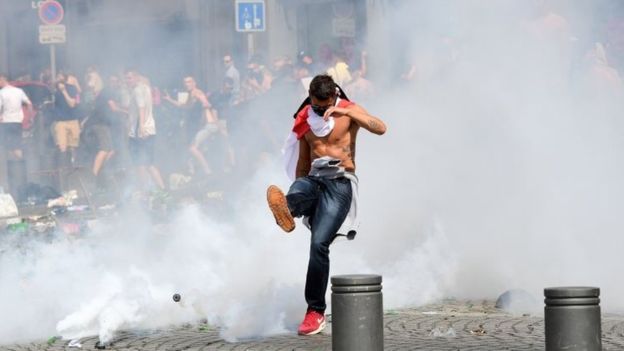 Some British journalists in the area have described the scenes on social media, and pointed the finger at a gang of black-clad Russians, who they said had entered the port city's main square from a side street apparently seeking violence.

England and Russian fans have been gathering at the city's port all day; I was mingling with them earlier and many were in good spirits — the odd tense scene, but others taking pictures and joking with police. 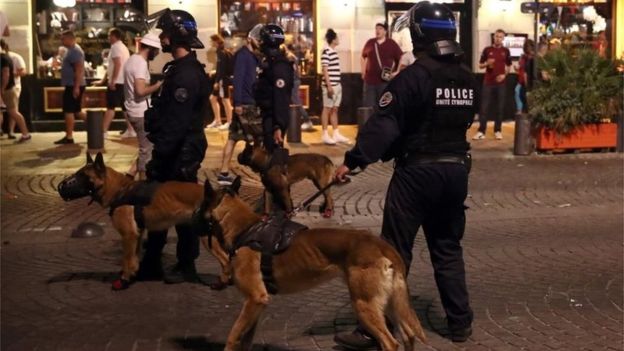 It's unclear what actually caused things to turn; one police officer told me there had been a confrontation between England fans and Russian fans in the square.
Some outlets have reported French police saying there were French fans involved too.

What followed was a pretty terrifying exchange of bottles being thrown shortly after 16:00 local time (15:00 BST).
I was in the square at the time and there were fans running everywhere after the first tear gas was fired, many clearly getting injured in the clashes. That went on for some time.
A group of fans — and from where I was standing, just behind the police line, the vast majority appeared to be England fans — continued to throw bottles at police, with officers returning volleys of tear gas and eventually charging those fans left in the square. 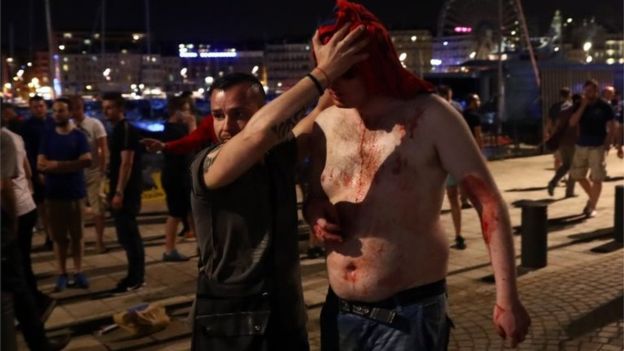 It's hard to say exactly what happened after that, but I saw fights in a number of streets around the port. It was only around an hour ago when I left that part of town that things seemed to be getting back to normal, though obviously with a considerably bigger police presence.
Meanwhile, Gary Lineker tweeted: "The trouble in Marseilles is utterly sickening."

Earlier, Mr Burnham said England fans had been "let down by a minority", who may have been provoked but were "not blameless" over the first two nights' violence.
In a series of tweets, Labour's Mr Burnham said when the terror threat in France was taken into account, it made the "behaviour of these England 'fans' even more embarrassing".

Chris Slegg, a BBC London reporter on holiday in Marseille for the football, said he had been at a bar with friends and other fans on Friday night, watching France's game against Romania, and the atmosphere had been friendly.
However, shortly after the match finished, a group of 20 to 30 French youths had emerged from side streets and thrown firecrackers and bottles at people who had been watching the game outside the bar, he said. The incident had been completely unprovoked, he said.

Dave Tomlinson, from the Football Supporters' Federation, who is in Marseille, told the BBC it had been "disappointing to see any problems" involving England supporters.
"We understand from the reports that it's a very small minority of England fans that have been involved," he said.

"We also understand that unfortunately there has been quite a lot of provocation from the French and also the Russian elements that are in the area."

He also said the style of policing was "a little bit different" from what England fans would be used to.

"The first option at the moment seems to be that the French police are going to put tear gas in the areas where there are potentially going to be problems."

BBC 5 live sports presenter George Riley said a group of England fans on Friday night appeared to be goading either the police or locals in the area.

He said the group he had seen gathering on Friday evening appeared "quite menacing", which prompted the 5 live team to leave.

This was outside a pub in the same area that had been affected on Thursday by trouble which had continued well into the early hours of Friday.

One England fan and one local man had been arrested in the early hours of Friday after police moved in with tear gas.