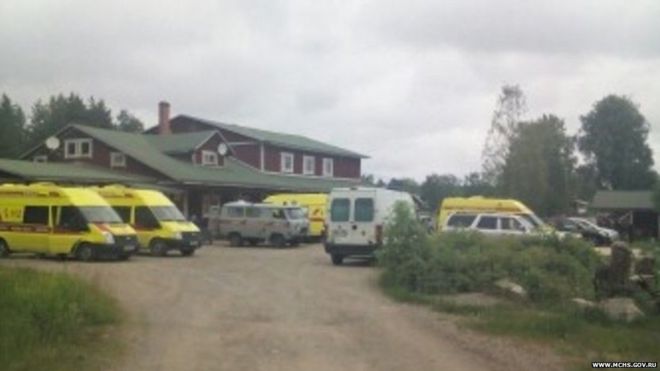 At least 11 children and an adult died when a storm caught a boating party on Lake Syamozero in northern Russia's Karelia region.

Ten children on holiday from Moscow were killed, according to the mayor of the Russian capital, Sergei Sobyanin, quoting preliminary information.

Of the group of 51, at least 36 are safe, emergency services said, with reports of survivors washing ashore.
An instructor has been arrested on suspicion of safety violations.

A team of doctors and psychologists has been dispatched from Moscow, according to Mr Sobyanin.

"A great tragedy has occurred in Karelia," he tweeted.
"According to preliminary data, 10 children from Moscow have perished on Syamozero. My condolences to their families and friends."

Rescue services said the survivors were being evacuated — 25 survivors from an island in the lake, and 11 from a village on the shore.

They said they had received an alert at 11:15 (08:15 GMT) on Sunday that a tour group was missing on Lake Syamozero after a storm.

Emergency crews using boats and helicopters were sent to the scene.

It appears that the boating party, mostly adolescents on holiday from Moscow and aged between 12 and 15, were staying in a summer camp near the lake, a popular outdoor tourism destination.

They had set out in boats on Saturday when the storm rose.

One of the survivors, a girl aged 12, raised the alarm after reaching a local village on Sunday, a police source told Russian tabloid Life News (in Russian).

Yulia is quoted as saying the group were using two boats and a raft when the storm began, and the craft were scattered across the lake.

Washed ashore, she only recovered consciousness on Sunday, after which she walked along the shore to the village of Kudama.

Along the way, she met a boy survivor who was covered in blood and could not move.

After taking note of the spot where she had found him, she reached the village, where a local resident phoned emergency services.

Vladimir Markin, a spokesman for Russia's state investigative agency SledKom, said an instructor had been arrested on suspicion of violating safety rules.

A regional MP, Alexei Gavrilov, reportedly told state TV channel Rossiya 24 there had been repeated warnings in the days before the storm, advising against any boating on the lake.

"They didn't have the right to go out boating," he was quoted as saying by the Associated Press news agency.