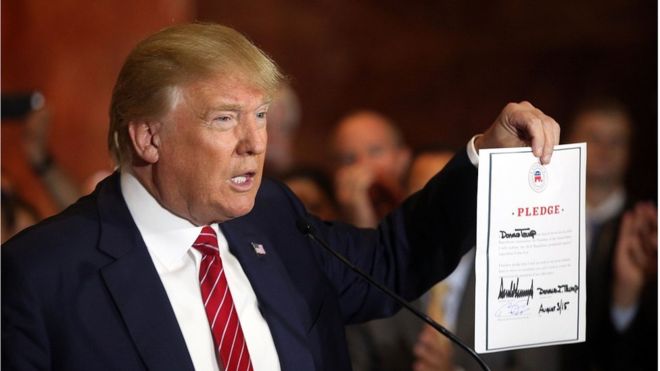 When is a pledge not a pledge?

That's the question hanging over the heads of two former presidential contenders here in Cleveland — the last two men Donald Trump vanquished on his path to the Republican nomination.

Both Ohio Governor John Kasich and Texas Senator Ted Cruz joined their fellow candidates in signing cards promising to endorse their party's eventual nominee "no matter who it is".

The gimmick was devised by Republicans back in September to prevent Donald Trump — who they never thought would win the nomination — from undermining the party and possibly launching an independent presidential bid in the general election.

Instead, it's become a cudgel that Mr Trump has used to bludgeon those — like Mr Cruz and Mr Kasich — who have not fallen in line (despite his own hinting, at times, that he would not honour the same pledge if he wasn't treated nicely by the party).
"They signed a pledge saying they will abide, saying they will back the candidate of the party," Trump said at a Maine campaign stop in June. "They broke their word. In my opinion, they should never be allowed to run for public office again because what they did is disgraceful."

"Disgraceful" is one of the kinder words that Trump supporters are using to describe Ted Cruz's speech before the National Convention on Wednesday night, in which he pointedly refused to embrace the party's standard-bearer.

As boos showered down on the Texan, he urged listeners to "vote their conscience" — with hardly a word of praise for Mr Trump.

On Thursday morning, Mr Cruz — who had been on the receiving end of numerous personal attacks from Mr Trump in the last days of the Republican primary season — fired back.

"I am not in the habit of supporting people who attack my wife and attack my father," he said. "That pledge was not a blanket commitment that if you go and slander and attack Heidi, that I'm going to nonetheless come like a servile puppy dog and say thank you very much for maligning my wife and maligning my father."

During primary season, Mr Trump had implied that Mr Cruz's father could be tied to the 1963 assassination of President John F Kennedy and tweeted out an unflattering picture of Mrs Cruz.

The Texan added that he could have taken an easier option, to "turn tail and run and don't come to the convention. There are a bunch of people that did that. I ain't one of them."

That was a shot at some of the other Trump rivals — including Jeb Bush, Rand Paul and Mr Kasich — who had avoided the convention hall altogether.

Mr Kasich, however, has been in around Cleveland all week. And while he's kept his distance from the convention site, he didn't avoid his own spat with the Trump team.

"That's a dumb, dumb, thing,'' Manafort said during a breakfast on Monday hosted by Bloomberg Politics. "Will John Kasich finally grow up? Maybe. If he does, we'll welcome him."

Former Trump advisor Roger Stone said Mr Kasich was a "pathetic stoner" who is "acting like a child".

Last month, Mr Kasich had compared breaking his endorsement pledge to a "divorce" — an unpleasant but occasionally necessary action. 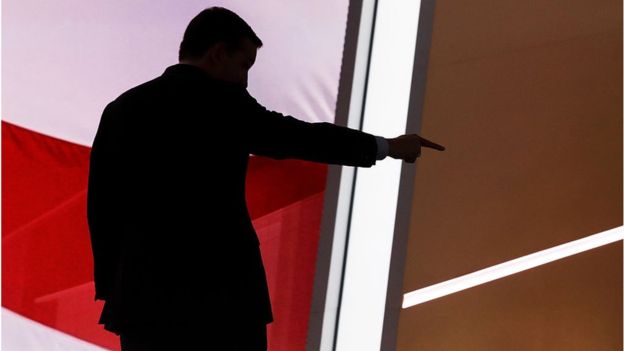 Although Mr Kasich never set foot in the convention hall, the Ohio delegation was full of supporters — many of whom said they appreciated what their governor was doing.

"You cannot make comments about Muslims and about the handicapped and about women and not expect that at some point that pledge gets thinner and thinner until it breaks," said former Ohio Attorney General Betty Montgomery.

"I think he took a principled stand and I respect him for that."

Many delegates were less forgiving.

"One thing about Republicans, we may disagree on candidates, but at the end of the day we believe in values and morals and ethics," said Georgia delegate Rachel Little, who at one point supported Mr Cruz.

Even Republican National Committee Chair Reince Priebus said the pledge is "more than a piece of paper". 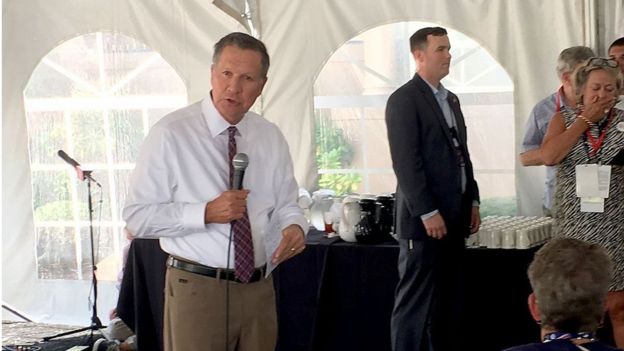 "This is a data exchange agreement that campaigns have signed with the RNC," he said in a television interview on Wednesday.

"In other words, 'I want your stuff and your data' and in order to get that stuff and data, what we ask them is that you actually agree to support the Republican nominee."

On Thursday morning, Mr Trump took to Twitter to respond to Mr Cruz's speech and the signs of strain his party was seemingly showing.

"Other than a small group of people who have suffered massive and embarrassing losses, the party is VERY united," he wrote. "Great love in the arena!"

The arena may love Mr Trump, and they may shower him with cheers when he accepts the nomination on Thursday night.

For now, however, some prominent politicians are not playing along — pledges be damned.