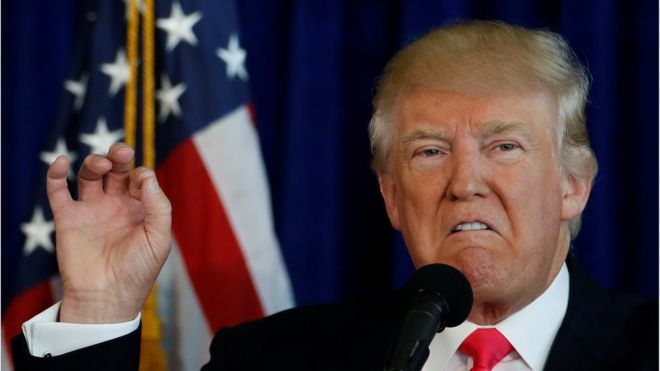 Donald Trump has "actively encouraged" foreign powers to hack his presidential rival Hillary Clinton, her camp says.
Mrs Clinton did not hand over 30,000 emails as part of an investigation into her private email server as they contained private details.

"Russia, if you're listening, I hope you're able to find the 30,000 emails that are missing," Mr Trump said on Wednesday.
"I think you'll be rewarded mightily by our press."
The emails would contain some "beauties", he said. Soon after, he wrote on Twitter that if anyone had the emails, they should hand them over to the FBI.

His appeal comes as Russia stands accused of hacking emails from the Democratic National Committee (DNC) for Mr Trump's benefit. Both Russia and Mr Trump deny the allegation.

"This has to be the first time that a major presidential candidate has actively encouraged a foreign power to conduct espionage against his political opponent," Jake Sullivan, Mrs Clinton's senior policy adviser, said.

"This has gone from being a matter of curiosity, and a matter of politics, to being a national security issue."

In a statement released within an hour of Mr Trump's comments, his vice-presidential candidate Mike Pence said there would be "serious consequences" if the FBI could prove Russia was attempting to interfere with the election.

The emails were leaked to the Wikileaks organisation and published on Friday.

The FBI is continuing its investigation into the leak, which included emails that showed DNC officials, who are supposed to remain neutral, favoured Mrs Clinton, and derided her Democratic rival Bernie Sanders.

In an interview with NBC News on Wednesday, President Obama — whose own government has been accused of carrying out hacks on other governments — refused to rule out the possibility Russia was responsible, adding: "What we do know is that the Russians hack our systems. Not just government systems, but private systems."

What has been the response?

Kremlin spokesman Dmitry Peskov said on Wednesday that President Putin "more than once has said that Russia would never interfere and does not interfere in the internal affairs of other countries, especially in the electoral process".

When challenged by the press to condemn foreign powers that may be trying to intervene in the US election, Mr Trump replied: "No, it gives me no pause.

"If Russia or China or any of those country gets those emails, I've got to be honest with you, I'd love to see them."

In a news conference in Florida, Mr Trump said he had "nothing to do with Russia".

When asked by reporters if Russian President Vladimir Putin might favour a win for Mr Trump, the billionaire said he had "never met Putin, I don't know who Putin is".

"Russia is a global menace led by a devious thug," said Brendan Buck, a spokesman for Paul Ryan, the Republican House Speaker. "Putin should stay out of this election."

What does this have to do with the Clinton email investigation?

The two issues have been brought together by Mr Trump but, on the surface, have nothing to do with each other.

Shortly before she was sworn in as secretary of state in 2009, Hillary Clinton set up an email server at her home in Chappaqua, New York. She then relied on this server, home to the email address [email protected], for all her electronic correspondence — both work-related and personal — during her four years in office.

It was 30,000 of the emails sent here that Mr Trump was encouraging hackers to find.

An FBI investigation concluded that Mrs Clinton should not face charges, but said she and her aides had been "extremely careless" in their handling of classified information.