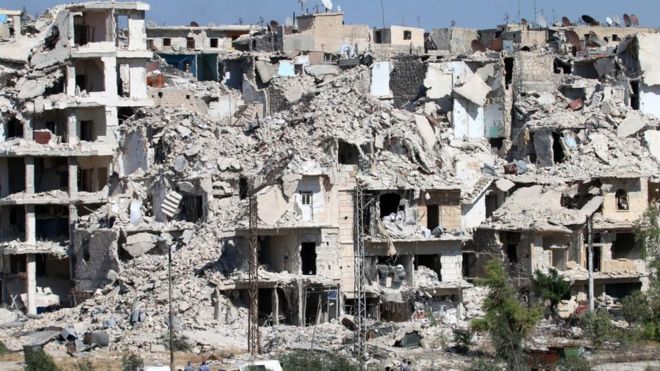 Dozens of families have left besieged eastern areas of the city of Aleppo along a humanitarian corridor, Syrian state media says.

Some rebels had also surrendered to government forces, the report said.

Russia, an ally of the Syrian government, announced on Thursday that four exit corridors would be opened in Aleppo for civilians and rebels.

The move was welcomed cautiously by the UN, the US and some aid agencies.

The US has suggested the plan may be an attempt to force the evacuation of civilians and the surrender of rebel groups in the city.

On Friday, the United Nations envoy to Syria said the corridors should be administered by the UN and that there should be a 48-hour ceasefire for people to leave safely.

About 300,000 people are trapped in rebel-held eastern Aleppo and the UN says food supplies are expected to run out in mid-August.

"This morning dozens of families left via the corridors identified… to allow the exit of citizens besieged by terrorist groups in the eastern neighbourhoods," Sana reported.

It showed pictures of people, mostly women and children, walking past soldiers and getting onto buses. It said they were taken to temporary shelters but gave no details.

The report also said some fighters had handed over their weapons and surrendered to the authorities.

Syrian President Bashar al-Assad has offered an amnesty for rebels laying down arms and surrendering within three months. 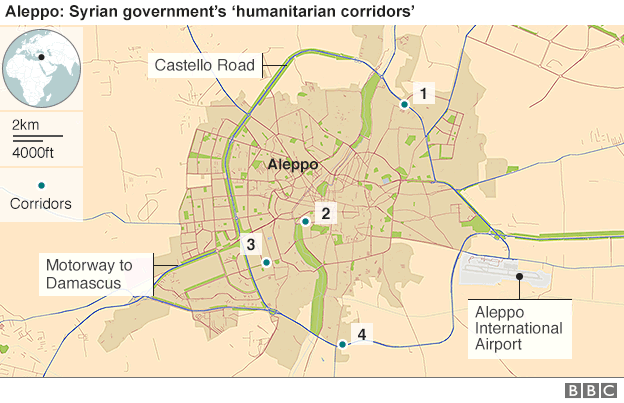 UK-based monitoring group the Syrian Observatory for Human Rights also said that "a number" of civilians had left eastern Aleppo through a passage in the Salaheddin neighbourhood.

Russia said there would be three exit corridors for civilians and unarmed fighters and a fourth one, in the direction of Castello Road, for armed militants.

The Syrian opposition, however, says the corridors are a government ploy to recapture all of Aleppo.

"These corridors are not for getting aid in, but driving people out," said Basma Kodmani of the opposition High Negotiations Committee.

"The brutal message to our people is: leave or starve."

UN envoy Staffan de Mistura said on Friday that the UN supported the humanitarian corridors in principle but it wanted Russia to provide more details on how they would work.

"Our suggestion to Russia is to actually leave the corridors being established at their initiative to us," Mr de Mistura told reporters in Geneva.

"The UN and humanitarian partners know what to do."

US Secretary of State John Kerry said that if the operation was "a ruse" it could disrupt US-Russian co-operation in Syria.

"On the other hand, if we're able to work it out and have a complete understanding of what is happening and then agreement on (the) way forward, it could actually open up some possibilities," he said.