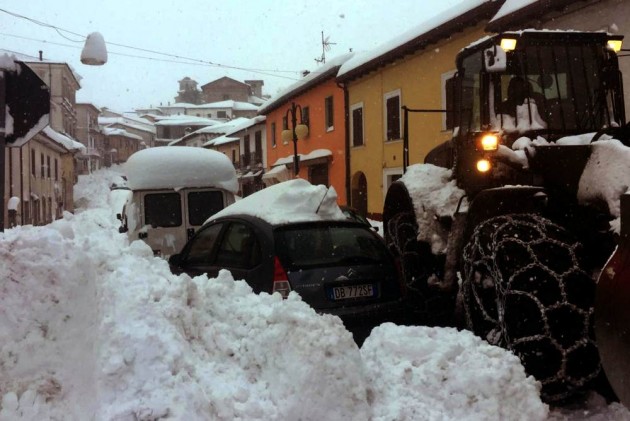 Up to 30 people were feared to have died today after an Italian mountain hotel was engulfed by a powerful avalanche in the earthquake-ravaged centre of the country.

Italy's Civil Protection agency confirmed the Hotel Rigopiano had been engulfed by a two-metre high wall of snow and that emergency services were struggling to get ambulances and diggers to the site.

The agency said there had been around 30 guests and staff at the small ski hotel on the eastern lower slopes of the Gran Sasso mountain when the first of four powerful tremors rattled the region yesterday morning.

Local media said specialist mountain police who had reached the hotel on skis or by helicopter had begun extracting bodies.

They were quoted as saying there were no signs of life inside the building, which was moved by some 10 metres by the force of the snow.

"There are many dead," one of the commanding officers, Antonio Crocetta, was quoted as saying.

The rescuers at the hotel were reported to have a snow mobile capable of transporting up to eight people.

Ambulances were blocked by two metres of snow some nine kilometres away, according to the civil protection agency.

Antonio Di Marco, president of the province of Pescara, which includes the mountain village of Farindola, close to where the hotel is located, said two people had been found alive.

"We don't know yet how many people are unaccounted for or dead," he wrote on his Facebook page.

"What is certain is that the building took a direct hit from the avalanche, to the point that it was moved by 10 metres."

Farindola mayor Ilario Lacchetta said on his Facebook page that "the dimensions of the avalanche were huge.

"It took the whole hotel with it." he said.

It was not clear if the two confirmed survivors had been at the hotel or had been out skiing when the avalanche occurred.

One of them was helicoptered to a hospital in Pescara suffering from hypothermia but was not in a life-threatening condition.

The region was hit by four seismic shocks measuring above five magnitude in the space of four hours on Wednesday, when at least one person was confirmed to have died.

The hotel is located around 90 kilometres from the epicentre of the quakes at Montereale, a small village south of Amatrice, the town devasted in an August earthquake in which nearly 300 people died.

Avalanche warnings were issued across the region which is dominated by Gran Sasso, a majestic 2,912 metres peak. The area has numerous small ski resorts popular with day-trippers from Rome and urban centres on Italy's east coast.