Rio 2016: Russia sees off first contestants on flight to Brazil 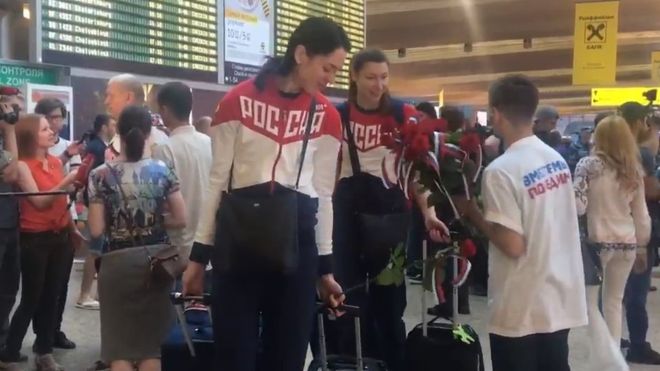 About 70 members of Russia's Olympic team have left a Moscow airport for Brazil to take part in Rio 2016 while others stay at home, banned for doping.

Members of the volleyball, handball, boxing, synchronised swimming and table tennis teams were seen off at Sheremetyevo Airport.

The World Anti-Doping Agency (Wada) wanted Russia banned from the Games.
But the International Olympic Committee left it up to individual sports federations to decide.

The IOC's decision not to act on Wada's recommendation was strongly criticised, with Wada chief Olivier Niggli saying the move would mean "lesser protection for clean athletes". 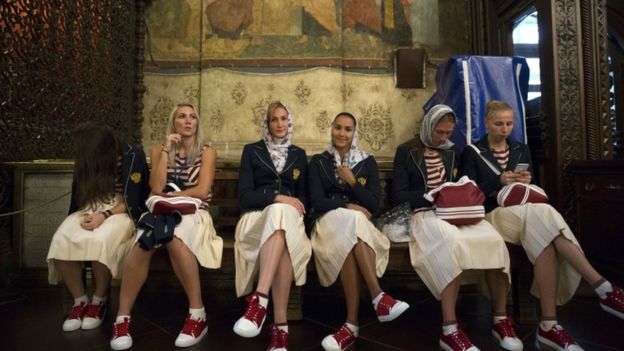 Journalist Katja Kuznetsova filmed some of the Russian team as they arrived at the airport.

Russia had hoped to send 387 competitors to Rio and more than 100 have so far been banned from going.

Among those excluded are 67 out of 68 from the athletics team.

Some international federations have banned Russians from competing altogether, some have issued a partial ban, while others have cleared all Russians to take part.
Others still are yet to decide.

He said medals won in Rio would be devalued by the absence of Russian competitors, telling the Russian team "the other sportsmen understand that the quality of their medals will be different".